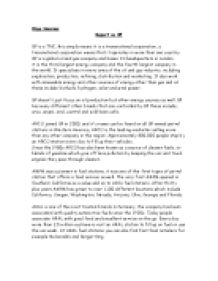 ﻿Rhys Harries Report on BP BP is a TNC, this simply means it is a transnational corporation, a transnational corporation means that it operates in more than one country. BP is a global oil and gas company and bases it?s headquarters in London, it is the third largest energy company and the fourth largest company in the world. It specialises in every area of the oil and gas industry, including exploration, production, refining, distribution and marketing. It also work with renewable energy and other sources of energy other than gas and oil these include biofuels, hydrogen, solar and wind power. BP doesn't just focus on oil production but other energy sources as well. BP has many different other brands that are controlled by BP these include; arco, ampm, aral, castrol and wild bean cafe. ARCO joined BP in 2000, and it's name can be found on all BP owned petrol stations in Western America, ARCO is the leading marketer selling more than any other company in the region. Approximately 800,000 people stop by an ARCO station every day to fill up their vehicles. Since the 1980s ARCO has also been known as a source of cleaner fuels, or blends of gasoline which give off less pollution by keeping the car and truck engines they pass through cleaner. AMPM was a pioneer in fuel stations, it was one of the first types of petrol station that offers a food service as well. The very first AMPM opened in Southern California as a value add on to ARCo fuel stations. After thirty plus years AMPM has grown to over 1,100 different locations which include California, Oregon, Washington, Nevada, Arizona, Ohio, Georgia and Florida. ...read more.

BP have taken full responsibility of the oil leak and the damage it caused to the environment, BP has acted to take responsibility for the clean up and to compensate the people that were affected by the impact of the accident As of 31 December 2010 BP spent $17.7 billion on the clean up as well as the compensation money. Where BP Operates I have chosen to focus on 6 different specific areas where BP operates these are : Africa (South Africa) Asia and Middle East (Saudi Arabia) Australasia (Australia) Europe (UK) North America (Canada) South America (Brazil) South Africa- BP has been based in South Africa since the early 1920s, BP has it?s African headquarters in Cape Town, but has since moved to Johannesburg in 2008. BP produces crude oil in at a refinery called Sapref which is only 16 km south of the city Durban. Sapref refinery is co-owned with another oil company called shell. BP Southern Africa employs more than one thousand people who come from many different cultural backgrounds there are 11 different languages spoken. The main centers of employment in South Africa are Johannesburg, Durban and Cape Town. BP doesn?t just focus on the oil aspect in South Africa and other African countries it invests alot of money into other projects like helping to prevent HIV and aids, but education is seen as the most important BP helps pay for the building of schools. Saudi Arabia- Since 1983 BP?s main business in Saudi Arabia is the supply and trading of Petroleum products such as lubricants and aviation fuel to whole sale and retail customers. The BP?s integrated supply and trading team purchase and supply a wide range of crude oil and refined products, destined for BP?s vast refining and marketing networks, as well as other international petroleum markets. ...read more.

In Brazil, BP holds a 50% stake in Tropical BioEnergia and plans to operate two ethanol refineries Wind Farms BP wind energy is a principal owner and operator of wind power facilities. BP has interests in eight operating wind farms, providing a gross generating capacity of more than 1,200 mega watts. This is enough electricity to power Washington DC. Currently BP has two other wind farm under construction and these will provide an extra 375 mega watt of electricity. Hydrogen Power Hydrogen Power is the new and exciting concept in energy at the moment, one of the energy?s that could revolutionise the world of low carbon electricity generation. This new generation of power stations will use a fossil fuel feed stock such as coal, petroleum coke or natural gas, taking out 90% of the carbon in the fuel, storing it deep underground as carbon dioxide and using the hydrogen to generate low carbon power for the grid. One such project BP is currently pioneering is with Masdar in Abu Dhabi where the early stage of engineering design work is underway. Here, a 400 mega watt natural gas based hydrogen power plant could produce low carbon electricity and capture up to 1.7 million tonnes of carbon dioxide each year. Flow Chart Explorations into where oil or natural gas may be located The oil or natural gas is then mined either on land or sea The oil and gas is then sent to a refinery via freight or pipeline Once the oil or gas is refined it is transported by lorry or freight to where it is needed The oil is the sent to other branches like castrol and turned into other products like lubricants for cars The refined oil or gas is sent to a petrol station to be stocked and sold to the customers Customer receives the final product! ...read more.