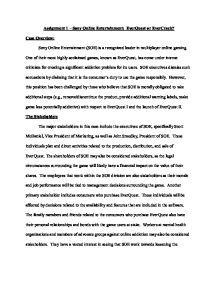 Assignment 1 - Sony Online Entertainment: EverQuest or EverCrack? Case Overview: Sony Online Entertainment (SOE) is a recognized leader in multiplayer online gaming. One of their most highly acclaimed games, known as EverQuest, has come under intense criticism for creating a significant addiction problem for its users. SOE executives dismiss such accusations by claiming that it is the consumer's duty to use the game responsibly. However, this position has been challenged by those who believe that SOE is morally obligated to take additional steps (e.g., remove/discontinue the product, provide additional warning labels, make game less potentially addictive) with respect to EverQuest I and the launch of EverQuest II. The Stakeholders The major stakeholders in this case include the executives of SOE, specifically Scott McDaniel, Vice President of Marketing, as well as John Smedley, President of SOE. These individuals plan and direct activities related to the production, distribution, and sale of EverQuest. The shareholders of SOE may also be considered stakeholders, as the legal circumstances surrounding the game will likely have a financial impact on the value of their shares. The employees that work within the SOE division are also stakeholders as their morale and job performance will be tied to management decisions surrounding the game. ...read more.

Egoism Egoism would argue that SOE directors should act only according to their own perceived long-term self interest. In this case, two major self-interests exist. Firstly, SOE may want to minimize the negative media publicity generated from EverQuest. There is a great deal of pressure from families and organizations dealing with online addiction to discontinue the product, add warning labels, or take other additional steps to make the game less potentially addictive. Mrs. Woolley has also contemplated filing a lawsuit against SOE for its alleged role in her son's suicide. Additionally, EverQuest has already been implicated in the death of a young child after the child's crying interrupted the father's game playing. Therefore, SOE may want to alter the features of the game or acknowledge potential dangers through more descriptive warning labels in order to prevent further damage to the company's reputation. The second major self-interest revolves around the sales and revenues that can be generated from EverQuest. At $40 per game with thousands of customers around the world, Sony has already gained tremendous earnings. Additionally, the revenues from online subscriptions reportedly resulted in inflows of nearly $5 million a month. ...read more.

Therefore, by not disclosing such potential hazards ahead of time, the executives failed to deter such individuals from purchasing the product and falling prey to social isolation. The SOE executives also voluntarily caused injury to the consumers of EverQuest. Despite being aware of the fact that the game was manufactured in such a way that it was addictive to consumers, they failed to disclose these facts clearly, perhaps for greater financial success. Procedural: The major flaw of SOE executives lies in the fact that they were not completely transparent to consumers. The game was heavily manufactured and promoted without informing consumers of the potential problems associated with the game. Societal: SOE executives also ignored the fact that the greatest benefit should go to the least advantaged. In this situation, the least advantaged would include those who are isolated, prone to boredom, lonely, or sexually anorexic. These individuals are more susceptible to the online addiction of Everquest because they have low self-esteem. Therefore, it would be argued that additional steps should be taken to the game in order to prevent further relationships being destroyed or psychological problems from existing. ...read more.