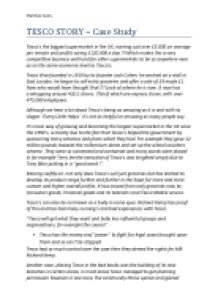 ï»¿Matthew Avery TESCO STORY – Case Study ________________ Tesco’s the biggest supermarket in the UK, earning just over £5,000 on average per minute and profits soring £120,000 a day !! Which makes this a very competitive business and hard for other supermarkets to be as anywhere near as on the same economic level as Tesco’s. Tesco Was founded in 1919 by its founder Jack Cohen, he worked on a stall in East London, he began to sell extra groceries and after a sale of £4 made £1. Now who would have thought that !!! Look at where he is now. It now has a whopping around 4,811 stores, 756 of which are express stores, with over 475,000 employees. Although we hear a lot about Tesco’s being as amazing as it is and with its slogan “Every Little Helps” it’s not as helpful or amazing as many people say. It’s main way of growing and becoming the largest supermarket in the UK since the 1990’s, is mainly due to the fact that Tesco’s helped the government by sponsoring many schemes and plans which they had. For example they gave 12 million pounds towards the millennium dome and set up the school vouchers scheme. ...read more.

Here’s the sneaky bit, Tesco’s bought out the building for 27 million and got ownership without the government knowing, they now had two massive stores but were not allowed due to the terms and moved back into the old store. They then sold of the land to 4 separate buyers and therefore sneakily eliminated any competition as only a small express supermarket was opened on that site. Now let’s look into more detail about the ‘Computer’s for Schools’ scheme and how it works. Tesco’s brought this scheme around which works on the ‘Every Little Helps’ scheme. Customers had a ten week period in order to save vouchers which could be used in their son/daughters school in exchange for equipment whether it be sporting equipment or computers. This was a big boost for Tesco’s and raised there profile and profits by quite a bit. For every £10 spent the customer received 1 voucher. Which then could be collected in order to trade for the equipment as mentioned above. Tesco’s would also have a celeb or MP etc to give the equipment to the school making the vouchers more enticing and appealing and yet again raising Tesco’s profile. The figures however for the number of vouchers needed were absolutely astonishing let’s see some of the figures : 1. ...read more.

Firstly Tesco?s has too much competition and is constantly competing with other supermarkets causing a lot of money to spent here there and everywhere and causing disruption when building new stores as mentioned earlier. Another reason is because of their customer choice and care. In a sense Tesco?s are only worried about the financial side of a business and not customer satisfaction, as long as money is going through the tills then Tesco?s are happy. This is a negative attitude towards their own business and should also be taking care of customer needs and wants ! Conclusion In conclusion I have summarised and can see clearly what sort of a business Tesco?s now behind its cover/shell. In my opinion ?It?s all about the money? with them and the growth of their business making sure that they are constantly growing and increasing profit. They have so much power now and believe they can rule the roost, but I believe that there streak of power, control and influential schemes will soon come to end if Tesco?s don?t play their cards right, I think that many people as I myself after seeing the documentary on Tesco?s will be shocked and be discouraged from continuing to shop there at all. And will be forced to an alternative. The slogan ?Every Little Helps? is completely untrue and in my opinion it should be ?Every Little Penny?. !!!!! ...read more.