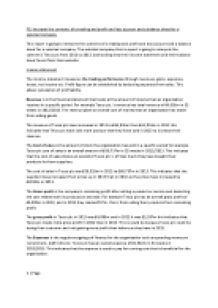 Equity is the amount of money shareholder get in return in the organisation. The equity in Tesco plc shows the amount the shareholder would receive after investing in to Tesco plc and paying off debt in Tesco plc for example Tesco plc total equity in 2013 is £16,643 million. However in 2012 the shareholder had 17,801million. This indicates that the shareholder didn’t get more money in 2013 than in 2012. In conclusion, Tesco plc.’s income statement and balance sheet has gone from good to bad. For example in 2012 Tesco plc had more gross profit and less cost of sales in 2012, but in 2013 Tesco plc had less gross profit and more cost of sales on their income statement, this indicates that in 2013 Tesco plc didn’t perform well as in the 2013, but performed a lot better in 2012. The balance sheet is the same from the income statement in some ways for example, Tesco plc’s non-current liabilities were £14,483 million in 2013 but in 2012 it was £13,731million. This shows that Tesco plc borrowed a lot more in 2013 than in 2012, which could mean that Tesco plc were trying to increase their finance more. | Page ...read more.