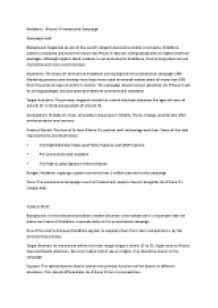 ﻿Vodafone - iPhone 5 Promotional Campaign Campaign brief: Background: Regarded as one of the world?s largest telecommunications company, Vodafone wants to massively promote the brand new iPhone 5 they are selling along with its highly beneficial packages. Although Apple?s latest creation is not exclusive for Vodafone, their pricing plans are just irresistible and most recommended. Objectives: The board of directors at Vodafone are hoping that the promotional campaign CRM Marketing produce and develop must help them reach an overall market share of more than 25% from the products launch within 6 months. The campaign should not just advertise the iPhone 5 and its pricing packages, but also portray Vodafone?s persona and standards. Target Audience: The primary targeted market for a while has been between the ages of teens of around 15 to fairly young adults of around 31. Competitors: Vodafone?s main competitors have been T-Mobile, Three, Orange, and 02 who offer similar products and services. Product Details: The best of its kind iPhone 5 is packed with technology and class. Some of the vital improvements are listed below: ? Full High Definition Video and Photo Features with 8MP Camera ? 4G Connectivity also available ? Full High Quality Signature Retina Display Budget: Vodafone is going to splash out more than 1 million pounds for the campaign. ...read more.

The interest of the target audience is nothing but to purchase the iPhone 5 with cheap packages provided by Vodafone to satisfy their customer?s needs. Based on the demographics this phone is mostly suitable for teens or young adults. Mainly the geographic location is the U.K for this promotional campaign. Design and presentation of promotional materials: ? Images: The Vodafone iPhone 5 advert would want to grab the attention of the audience as soon as it comes on. In order to achieve this, the images must include vibrant colours and a strong appearance. ? Typography: The purpose of the advert must be properly suggested. Since the iPhone 5 has a mass appeal, the advert can include specific texts to illustrate the product?s brilliance. The factors above must be paid attention to while forming the correct demonstration for the campaign. Text and media type: The application of words has to be reflected upon with the selection of media. In this case for a T.V advert the following factors are important: ? Length of advert ? The vital message that has to be shown to the audience ? How would Vodafone wish the audience should recall their advert ? Has to be helpful as it not cheap to produce such adverts ? What is going on in the advert is more important than what is being told. ...read more.

What media should be applied? T.V is the right choice as there is enough money available and to be able to reach a vast and massive target market in the U.K, this media is perfect. Will the internet be used, if yes then how? Vodafone also plans to promote their iPhone 5 packages on their official U.K website. The website can be accessed by anyone with a computer and it may also be listed at the end of the advert. ? Scheduling the frequency and timing of the promotion: The campaign must be launched at the same date as the iPhone 5 release date from Apple in the U.K. The frequency must not be fully maximised as the product already has a mass market appeal, therefore it should be kept at a medium level by not annoying the audience too much. ? Reviewing promotion plan: The entire campaign must be constantly checked alongside the aims to test how effective it will be and any essential actions may be taken to further increase the outcomes or acclimatise the targets. SMART objectives will make this procedure much simpler. If everything is approved and ready, the T.V advert will go on air with various national T.V channels across the nation 7 to 8 times every day. Vodafone should hope the prime target audience is pleased with the lively and vivid advert they have made. ...read more.