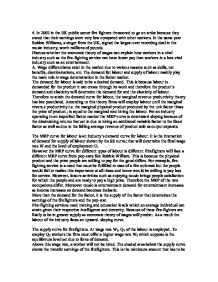 4. In 2002 in the UK public sector fire fighters threatened to go on strike because they stated that their earnings were very low compared with other workers. In the same year Robbie Williams, a singer from the UK, signed the largest ever recording deal in the music industry, worth millions of pounds. Discuss whether the economic theory of wages can explain how workers in a vital industry such as the fire-fighting service can have lower pay than workers in a less vital industry such as an entertainment. A. Wage differentiates exist in the market due to various reasons such as skills, net benefits, discriminations, etc. The demand for labour and supply of labour mainly play the main role in wage determination in the factor market. The demand for labour is said to be a desired demand. This is because labour is demanded for the product it can create through its work and therefore the product's demand and elasticity will determine the demand for and the elasticity of labour. ...read more.

Therefore the MRP of the two occupations differ. Moreover music is entertainment demand for entertainment increases as income increases so demand becomes inelastic. More than the demand for the factor, it is the supply of the factor that determines the earnings of the firefighters and the pop-star. Fire-fighting services need training and education levels which an average individual can attain given their respective intelligence and dexterity. Because of these fire-fighters are likely to be in greater supply as economic theory of wages will predict. As a result the labour of the industry faces an upward- sloping curve. The supply curve for firefighters. At wage rate W1, Q1 of the labour is employed. To employ Q2 workers the firm must offer a higher wage rate W2 which suppose is the equilibrium level set due to force of demand. Above this wage rate, a worker will not be hired. The shaded area below the supply curve shows the transfer earnings of the firefighters. ...read more.

However due to media and communication systems Robbie William's music is being spread globally and so the demand for his services comes from the global market and hence drives his earnings to really high levels. Even within the UK, people's real wealth has increased. As a result cost for fire-services has become proportionately low part of people's income. But moreover the rise in real wealth has meant that there is an increased demand for output from the sectors pop stars perform in because people have more time for leisure. In the music and entertainment industry there is a premium to being the very best over what the merely competent can command. As Robbie Williams 'signed the largest ever recording deal' that year it means that consumers consider him as the 'best' and hence he is able to earn very high. This sort of competition is less likely to occur among firefighters and hence their wages are low. Therefore economic theory of wages can explain why firefighters earn low whereas pop-stars earn high despite being in are relatively less vital industry ...read more.