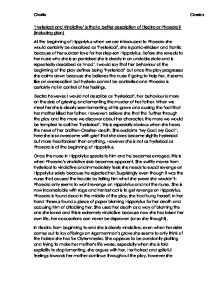 'Hysterical and Vindictive' is that a better description of Electra or Phaedra? (including plan)

'Hysterical and Vindictive' is that a better description of Electra or Phaedra? (including plan) At the beginning of Hippolytus when we are introduced to Phaedra she would certainly be described as 'hysterical', she is panic-stricken and frantic because of her sudden love for her step-son Hippolytus. Before she reveals to her nurse why she is so panicked she is clearly in an unstable state and is repeatedly described as 'mad'. I would say that her behaviour at the beginning of the play defines being 'hysterical' but once the play progresses she calms down because she believes the nurse if going to help her. It seems like an overreaction but hysteria cannot be controlled and Phaedra is certainly not in control of her feelings. Electra however, I would not describe as 'hysterical', her behaviour is more on the side of grieving and lamenting the murder of her father. When we meet her she is clearly seen lamenting at his grave and cursing the fact that her mother killed her father. ...read more.

Phaedra is found dead in the middle of the play, she had hung herself. In her hand Theseus found a piece of paper blaming Hippolytus for her death and accusing him of attacking her. She used her death as a way of blaming the one she loved and this is extremely vindictive because now she has taken her own life, her accusations can never be disproven (or so she thought). In Electra from beginning to end she is clearly vindictive, even when her sister comes out to lay offerings on Agamemnon's grave she seems to only think of the hatred she has for Clytemnestra. She appears to be constantly plotting and trying to make her mother's life worse, especially when she is told explicitly to stop lamenting, she argues with her. Her hatred and spiteful feelings towards her mother continue throughout the play, however she seems less vindictive than Phaedra by the end of the play. This is because once Orestes has revealed that he is still alive, it is he and the Paedagogus that carry out the deed of killing Clytemnestra and Aegisthus, not Electra. ...read more.

"...now the wretched woman, groaning and reduced to madness by love's cruel jabs, is dying without speaking a word." She has resorted to drastic measures because she is in the agony of love, she cannot confide in anyone so that makes her suffering even harder on her. Here the nurse and chorus-leader are deliberating what could be wrong with her. We feel sorry for Phaedra because of her pain and the fact that she must endure it alone (for now) "Kill herself, you say? Well, her refusal of food is certainly likely to remove her from life." We feel sorry for her because even though she has been promised that the nurse will not say anything to him and will find her a charm- yet this all goes terribly wrong and the nurse eventually tells Hippolytus and this ultimately causes the suicide of Phaedra. She was betrayed by the only person she confided in, so we sympathise with Phaedra. "But in so dying i will prove deadly to another's life, to teach him not to triumph over my downfall...then her shall learn what restrain is" ?? ?? ?? ?? Charlie Classics ...read more.