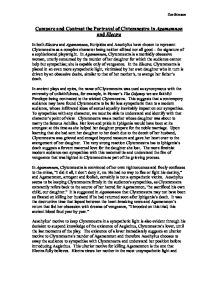 Compare and Contrast the Portrayal of Clytemnestra in Agamemnon and Electra

Compare and Contrast the Portrayal of Clytemnestra in Agamemnon and Electra In both Electra and Agamemnon, Euripides and Aeschylus have chosen to represent Clytemnestra as a complex character being neither all bad nor all good - the signature of a sophisticated playwright. In Agamemnon, Clytemnestra is a morbidly obsessive woman, utterly consumed by the murder of her daughter for which the audience cannot help but sympathise; she is capable only of vengeance. In the Electra, Clytemnestra is placed in an even more sympathetic light, victimised by her own daughter who in turn is driven by an obsessive desire, similar to that of her mother's, to avenge her father's death. In ancient plays and epics, the name of Clytemnestra was used as synonymous with the extremity of unfaithfulness, for example, in Homer's The Odyssey we see faithful Penelope being contrasted to the wicked Clytemnestra. This suggests that a contempory audience may have found Clytemnestra to be far less sympathetic than to a modern audience, whose infiltrated ideas of s****l equality inevitably impact on our sympathies. To sympathise with any character, we must be able to understand and identify with that character's point of view. Clytemnestra was a mother whose daughter was about to marry the famous Achilles. Her love and pride in Iphigenia would have been at its strongest at this time as she helped her daughter prepare for the noble marriage. ...read more.

Clytemnestra's ability to 'manoeuvre' is also an attribute dwelt upon. Clytemnestra obtains what she wants by devious means, relying upon herself to manoeuvre around others, "I'll gather all I need." Another example of her guile is her system of beacons she invents so that she may be the first to know the end of the Trojan War. She clearly delights in her own cunning and makes sure that everyone appreciates her ingenuity, "I ordained it all." Clytemnestra's intellect is clear throughout Agamemnon but especially clever is her idea of persuading her husband to walk upon the sacred tapestries which would incur the gods' wrath and justify her murder. This method Clytemnestra thought of may however indicate more than her intellect. Clytemnestra's need to incur the gods' wrath may expose the first and last instance of self-doubt in the Agamemnon. Clytemnestra must feel deep down that, after all, she may not be fully justified to kill Agamemnon purely on his unjust sacrifice of their daughter Iphigenia. This is clearly Electra's view of her mother's actions displayed in Electra. Electra tells us that Clytemnestra is a cruel, pitiless, woman; a killer of her own husband who deserves to be punished for her actions. All of these assertions hold truth; she is indeed a cruel and pitiless killer, plotting for years and then finally rejoicing over Agamemnon's death. ...read more.

Clytemnestra also does not call for Orestes to come back to the palace. Both of these were done as an attempt to safe-guard her position as Queen; a purely selfish motive leaving no room for maternal feelings and recalling the harsher depiction of her character in Agamemnon. We can also expose some outright lies Clytemnestra tried to make Electra believe when structuring her defence. She tells Electra that it was Cassandra who finally pushed her to kill Agamemnon when we know that she had been planning his death all along. Knowing that she lied about this, can we take her subtle suggestions of maternal love to be genuine or another scheme, typical of her character in Agamemnon. In both plays we only see her through the eyes of others, she isn't actually strongly characterised. Her psychological reasons for the murder are the point and not her emotional state. Considering this, both Agamemnon and Electra reach similar conclusions concerning Clytemnestra's situation. She has ample grounds for hating her husband but no-one holds her justified in killing him in either play, "your words are just; yet in your 'justice' there remains something repellent." Electra disposes of her mother's defence in detail and leaves the audience feeling that Clytemnestra's murder of her husband really was not warranted. How different the plays are in their depiction of her character depend on how the reader chooses to interpret Clytemnestra's maternal professions; either genuine and loving or devious and selfish. Zoe Stimson ...read more.