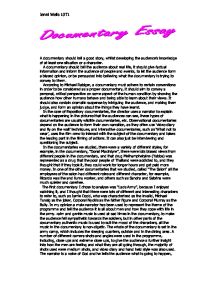 A documentary should tell a good story, whilst developing the audience's knowledge of at least one situation or a character.

calm and gentle music is used at sad times in the documentary, to make the audience fell sympathetic towards the soldiers, but in other parts of the documentary authentic music is used to suit the mood of the characters, all the music in the documentary is non-digetic. The whole of the documentary is set in the army camp, which includes the sleeping quarters, outside and in the dining area. A number of different camera shots and angles were used in the programme, including, close ups and extreme close ups, to give the audience a further insight into how the men are feeling and what they are all going through, the majority of shots used were medium shots, and video diary and hand held style was also used. The narrator is a voice of God and he tells the audience what is going to happen, and what is happening throughout the documentary. The only use of titles in the programme, were the name of the documentary, at the start and finish, and some of the cameras have titles with the name and profiles of the soldiers displayed on them. ...read more.

I think this was an informative and enjoyable documentary, because it educated the audience by giving them the chance to see what it is like to live as a soldier, and it was enjoyable, because the audience is able to form a bond with the characters, and get to know about their personal life. I also enjoyed "School" because, I felt as though I could relate to some of the pupils. I think that the documentary is aimed at school children, because many, like me, will be able to relate to the characters, but I also think that the documentary is aimed adults, so that they can see what it is like, and what goes on in modern day schools. I have enjoyed working, and learning about documentaries, and feel I have learnt a lot, about how different camera angles, music, lighting, etc, can tell the audience a good story and encourage them into another persons world. Jenni Wells 10T1 ...read more.