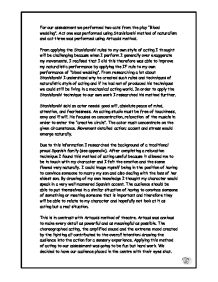 For our assessment we performed two acts from the play "Blood wedding". Act one was performed using Stanislavski method of naturalism and act three was performed using Artuads method. From applying the Stanislavski rules to my own style of acting I thought will be challenging because when I perform I generally over exaggerate my movements. I realised that I did this therefore was able to improve my naturalistic performance by applying the IF rule to my own performance of "blood wedding". From researching a lot about Stanislavski I understand why he created such rules and techniques of naturalistic style of acting and if he had not of produced his techniques we could still be living in a mechanical acting world. In order to apply the Stanislavski technique to our own work I researched his method further. Stanislavski said an actor needs: good will, absolute peace of mind, attention, and fearlessness. ...read more.

This is in contrast with Artauds method of theatre. Artaud was anxious to make every detail as powerful and as meaningful as possible. The choreographed acting, the amplified sound and the extreme mood created by the lighting all contributed to the overall intention: drawing the audience into the action for a sensory experience. Applying this method of acting to our assessment was going to be fun but hard work. We decided to have our audience placed in the centre with their eyes shut. Us the actors would therefore be performing around them. Having your eyes shut in any situation where other people are around can be intimidating let alone with noise and flashing lights. I found this method of acting fun and easy to perform as it was over the top and you got to have fun with it and didn't have to restrict yourself and the audience may feel more involved as they are in the centre. ...read more.

This could have perhaps made our characters more believable to the audience but we did sustain our role of the character throughout. The subject matter was dealt with in an appropriate way and the emotions that were explored by the performer were realistic. Individual character analysis. Ruth performed "Miss Julie" using Artauds method: She sustained a good focus throughout the performance and managed to keep her concentration although she was playing such a dramatic character. She created a character that the audience could sympathise with. It became a very emotional piece of drama to engage. Her facial expression was very interesting and added great depth to her performance. She could have projected her voice slightly louder so the audience could understand her throughout as at some points in the performance it became hard to hear what she was saying and therefore did affect her performance. Overall Ruth made her performance emotional for the audience to watch and was quite touching, you got a real sense of realness and she became the character. ...read more.