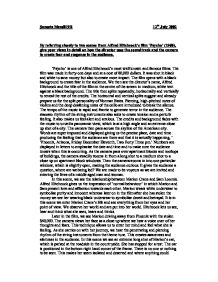 By referring closely to two scenes from Alfred Hitchcock's film 'Psycho' (1960), give your views in detail on how the director uses the soundtrack and the camera to create fear and suspense in the audience.

Saneeta Mandil 9R 12th July 2002 By referring closely to two scenes from Alfred Hitchcock's film 'Psycho' (1960), give your views in detail on how the director uses the soundtrack and the camera to create fear and suspense in the audience. 'Psycho' is one of Alfred Hitchcock's most well known and famous films. The film was made in forty-one days and at a cost of 80,000 dollars. It was shot in black and white to save money but also to create more impact. The film opens with a black background to create fear in the audience. We then see the director's name, Alfred Hitchcock and the title of the film in the centre of the screen in medium, white text against a black background. The title then splits repeatedly, horizontally and vertically to reveal the rest of the credits. The horizontal and vertical splits suggest and already prepare us for the split personality of Norman Bates. Piercing, high-pitched notes of violins and the deep deafening notes of the cello are introduced to break the silence. The tempo of the music is rapid and frantic to generate terror in the audience. The staccato rhythm of the string instruments also adds to create tension and a perturb feeling. ...read more.

As the police officer opens his car door, we see the police badge printed on it. As the officer exits his car, he is walking towards the camera. This effect makes the audience feel that he is walking towards us. The low angle shot is used to convey his authority. This creates fear and makes the audience feel threatened. This scene is made up of many short, sharp cuts, mainly in big close ups. All natural sounds are heard to build up tension and suspense. As the police officer is at Marion's car side, he knocks on her window. In this shot Marion is lying down. As she hears the knock, she wakes up immediately and abruptly with panic. As she looks at the officer, she appears to very nervous and overcome with anxiety. Her eyes are extremely wide and bold as she is filled with fright. This scene cuts to Marion and then to the officer many times. The camera shows a subjective shot, from Marion's point of view so when he is looking at her it appears to the audience that he is looking at us. This makes us feel what she does. Dark sunglasses blank the police officer's eyes out so we cannot tell what he is looking at. ...read more.

A subjective shot of the knife is shown to produce the feeling that the figure is almost stabbing at us. Rapid shots are shown of the killing, twenty-eight shots in twenty seconds. Several shots are used of Marion moving from side to side and struggling to defend herself to show that she cannot stop the killer. The camera swoops in with a high angled shot of Marion's blood draining away in the bath. A big close up of Marion's hand is shown as she slides down the wall. As this is taking place, the deep, heavy sounds of the cello is heard. We see Marion turn around and slide down further, as she does this she reaches out her hand. This suggests she is maybe reaching out to us or to the shower curtain. In the final shot, we see the camera panning to show the blood of Marion draining down the plughole to suggest that her life is draining away. The camera zooms into the plughole where an extreme close up of it is shown and is mixed with Marion's eye. The eye then becomes a staring, lifeless, emotionless eye. This suggests that we see, hear and think no more from her eye. For its time 'Psycho' was one of the most frightening, psychological thrillers ever made and even by today's standards still has the power to terrify. ...read more.