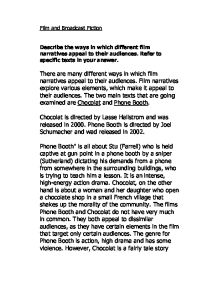 Describe the ways in which different film narratives appeal to their audiences. Refer to specific texts in your answer.

Film and Broadcast Fiction Describe the ways in which different film narratives appeal to their audiences. Refer to specific texts in your answer. There are many different ways in which film narratives appeal to their audiences. Film narratives explore various elements, which make it appeal to their audiences. The two main texts that are going examined are Chocolat and Phone Booth. Chocolat is directed by Lasse Hallstrom and was released in 2000. Phone Booth is directed by Joel Schumacher and wad released in 2002. Phone Booth" is all about Stu (Farrell) who is held captive at gun point in a phone booth by a sniper (Sutherland) dictating his demands from a phone from somewhere in the surrounding buildings, who is trying to teach him a lesson. It is an intense, high-energy action drama. Chocolat, on the other hand is about a woman and her daughter who open a chocolate shop in a small French village that shakes up the morality of the community. ...read more.

The character Vienne and her daughter arrive in the village and bring with them a change to the town. She does not fit in with the town's people. She is independent and is more passionate about life. She dresses in a different way and talks with experience. Compared to her the town people are more merged together and dress in the same way and share the same beliefs. Vienne sets up her own chocolate shop, which bring more change to the town. Vienne in a way is challenging the rules of the town. The narrative is interesting as it is the chocolate that brings out the independence in each character. This helps the audience engage with the narrative as it is bringing out the personalities of the character and is making the audience want to find out more about them. Chocolat is character driven and allows time for the audience to get to know the characters. ...read more.

Aside from the Mayor, Vienne has an effect on several townspeople, most notably Judi Dench, from whom she is renting the space. She is an angry woman who has been denied the right to see her grandson, even though he lives in the same small town. She does not agree with her daughters' methods of upbringing, but Vienne arranges a meeting that brings the two close together. Also, an abused woman named Josephine, is inspired by Vienne's spirit to leave her husband (Peter Stormare) but is seen in bad light since she is forgetting about her marriage vows. Josephine works at the shop and is soon an independent person. Binoche and Dench certainly deserved their Oscar nominations, but Lena Olin as Josephine should have received one, too. Very enjoyable, lightweight for the most part but worth seeing ...read more.