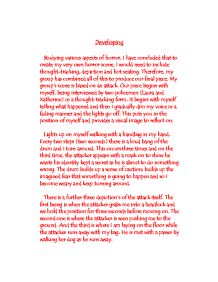 Developing my very own horror scene.

Developing Studying various aspects of horror, I have concluded that to create my very own horror scene, I would need to include thought-tracking, depiction and hot seating. Therefore, my group has combined all of this to produce our final piece. My group's scene is based on an attack. Our piece begins with myself, being interviewed by two policemen (Laura and Katherine) in a thought-tracking form. It begins with myself telling what happened and then I gradually dim my voice in a fading manner and the lights go off. This puts you in the position of myself and provides a visual image to reflect on. Lights up on myself walking with a handbag in my hand. Every two steps (two seconds) there is a loud bang of the drum and I turn around. This occurs three times and on the third time, the attacker appears with a mask on to show he wants his identity kept a secret as he is about to do something wrong. The drum builds up a sense of caution; builds up the imagined fear that something is going to happen and so I become weary and keep turning around. There is a further three depiction's of the attack itself. The first being is when the attacker grabs me into a headlock and we hold the position for three seconds before moving on. ...read more.

Now that we have added it, I believe the depiction's of the attack are extensively effective. This is because before my hands were flying everywhere as I didn't know what to do with them and it all happened very quickly whereas now, the audience can see exactly what is happening and can have a greater understanding. I also think that the use of sound leading up to the attack as it creates an impact that keeps you on the edge of your seat. One final thing that is good about our scene is that it involves everyone equally so that no one is left out or has a too smaller part. I think we used space very well. In the beginning we cut across the floor diagonally to insure we use as much space as possible. This also shows that we are in a spaced out environment (the park) to give a visual image. The attack should then take place near about the middle of the floor so the depiction's can be seen from all angles of the audience and of cause, me and my partner will face the audience at all times. The hot seating is different. Hot seating doesn't require much space but the in which we use the adequate space is good as we rotate in a circular motion around the seat, getting faster and faster to give the effect of interrogation. ...read more.

Therefore, I think that rather than lean into the witness, they should face the audience and say it to put a close on the horror scene. I think this would work better. However, this is a joint decision between the group and I will ask and see what they think of how it works now and if they like it and if they don't then I will propose my idea to see what they make of it. If they are willing to, we will change this bit to add it in. I also think that the drum beating in the hot seating is too alike that of the build up to the attack. The one with the attack works better than the one in the hot seating mainly because it is repeated when doing it with the witness. The idea is to make the defendant feel isolated with the drum beating and not the witness. I think we should change this and keep the drum in the lead up to the attack but possibly change the hot seating instrument for each. I will consult the rest of the group. All in all, with a little improvement, our horror scene should be very effective on its audience. At the moment, we are obviously still in the development stage and need to clean it up a little, too so that it looks almost real! ...read more.