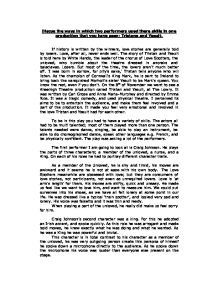 Discus the ways in which two performers used there skills in one production that you have seen: Tristane and Yseult. If history is written by the winners, love

Discus the ways in which two performers used there skills in one production that you have seen: Tristane and Yseult. If history is written by the winners, love stories are generally told by losers. Love, after all, never ends well. The story of Tristan and Yseult is told here by White Hands, the leader of the chorus of Love Spotters, the unloved, who bumble about the theatre dressed in anoraks and balaclavas. Losers. But most of the time, the lovers aren't much better off. 'I was born in sorrow, for pity's sake,' Tristan tells anyone who will listen. As the champion of Cornwall's King Mark, he is sent to Ireland to bring back the vanquished Morholt's sister Yseult to be Mark's queen. You know the rest, even if you don't. On the 8th of November we went to see a Kneehigh Theatre production called Tristan and Yseult, at The Lowry. It was written by Carl Grose and Anna Maria-Murphey and directed by Emma Rice. It was a tragic comedy, and used physical theatre. I perceived its aims to be to entertain the audience, and make them feel involved and a part of the production. ...read more.

This character is in total contrast to his character as a member of the unloved, he was very outgoing person create this persona of himself he spoke down a microphone directly to the audience. As he spoke down the microphone his voice was louder than everyone else present on the stage. His use of space and movement were also very certain. He walked across the stage and did moves to show he was the most powerful on the stage; he did little skips to show his confidence. As an audience we liked him, he was charming and made us laugh. He let us join in on what he was doing and kept us focused on him constantly. For this part he used his physical skills to stage an unrealistic fight. Johnsons next role was my favourite character. Craig Johnson as Yseult's maid Brangian is a star of the production, and has particular fun with the love potion scene, urging the soon-to-be-lovers not to mix up Yseult's potion (to help her face marriage with a man she has never seen) with Tristan's wine. For this role he wears a dress, and a headscarf, the directors made it so obvious that he was a man dressing as a woman, it was very stereotypical. ...read more.

On his first scene he had to fight King Morhort, Yseult's father, and kill him. This fight was staged to look unrealistic. He showed no fear in any aspect of the play, either when fighting, or sleeping with his fathers' wife/fianc�. He seemed a very calm, funny, laid back character until his fathers wedding. The atmosphere happy and joyful and he was dancing with Yseult, but then he had to make a speech and he went extremely serious. When he was serious he made no eye contact, he looked down, his voice became monotonous, it seemed like he had lost life he said 'I have seen all grief death and war and never cried but I cannot bare to look at her take his hand' when saying this he broke our hearts, but just like before, only seconds later were we laughing again. To play Tristane you would need physical strength, physical confidence and show no fear on the stage. He also had to be attractive to audience members. None of these however were enough for Tristanes' happy ending, the man, who could never become unloved, became unloved. Overall my favourite character was Nurse Brangian played by Craig Johnson, he just had the power to capture all our emotions, and manipulate them to make us feel for him, either happy or sad. ...read more.