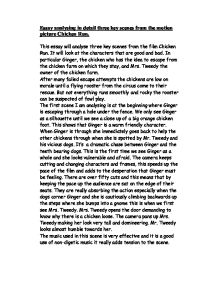 Essay analysing in detail three key scenes from the motion picture Chicken Run. This essay will analyse three key scenes from the film Chicken Run. It will look at the characters that are good and bad. In particular Ginger, the chicken who has the idea to escape from the chicken farm on which they stay, and Mrs. Tweedy the owner of the chicken farm. After many failed escape attempts the chickens are low on morale until a flying rooster from the circus come to their rescue. But not everything runs smoothly and rocky the rooster can be suspected of fowl play. The first scene I am analysing is at the beginning where Ginger is escaping through a hole under the fence. We only see Ginger as a silhouette until we see a close up of a big orange chicken foot. This shows that Ginger is a warm friendly character. When Ginger is through she immediately goes back to help the other chickens through when she is spotted by Mr. Tweedy and his vicious dogs. It's a dramatic chase between Ginger and the teeth bearing dogs. This is the first time we see Ginger as a whole and she looks vulnerable and afraid. The camera keeps cutting and changing characters and frames, this speeds up the pace of the film and adds to the desperation that Ginger must be feeling. ...read more.

Tweedy. Again the camera pans up Mrs. Tweedy making her look really tall and powerful, she stands hands on hips looking almost like a giant or an ogre. The chickens are about the same size of Mrs. Tweedy's wellington boots and this is actually quite important as it gives us the audience a sense of proportion. Especially when the camera skims along the lines as if it's inside the chicken farm. This really makes the audience feel close to the chickens its like being inside the film. This is quite a dramatic scene and that is reflected in the music, which is again non-digetic. As this is a film aimed mainly at children and the feel of the scene is a bit heavy and depressing for small children so some light comedy is added in e=when Mrs. Tweedy strikes down and clasps Babs (in what turn's out to be a tape measure not a weapon). Babs puts her hands together in a prayer like manor and heavenly music is played. This adds a touch of humour to the scene. Through out this scene Ginger is standing next to Babs holding her hand this seems to bear little significance at that moment but it proves that she holds no grudges for being caught trying to help the others escape. She obviously doesn't resent the other chickens as they have such a strong bond. ...read more.

the film, catapult eggs, that they really worked hard to get, they are heading straight at mrs tweedy knocking her off balance, obstructing her vision. They are crying and kissing the eggs they are using this is quite funny and will appeal to the younger audience. At the end of the scene mrs tweedy takes one giant swing with the axe and it looks as if ginger has been brutally decapitated but it turns out that mrs tweedy cut the rope on which she was attached to the chickens plane! Ginger looks up at mrs tweedy straight in the eyes showing her the severed rope shaking her head the simply shrugging her shoulders before letting go of the rope. As mrs tweedy fall ginger waves this also adds a touch of comedy, the camera pans round the chickens who are smiling and cheering, ginger is helped back onto the plane by rocky and it is clear that they have a bond that is not shared by the other chickens. This was an excellent film and it appeals to a wide variety of audiences, to small children to adults and grandparents. This film has so many levels to it some of the humour is subtle and some of it is obvious (like the mice Nick and Fletcher). The drama in this film is quite strong but the fact that it's a cartoon and they add in comedy at exactly the right moments make this film really fantastic. ...read more.