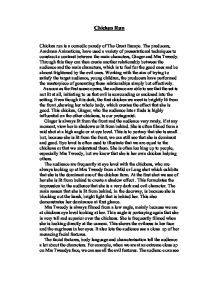 Chicken Run Chicken run is a comedic parody of The Great Escape. The producers, Aardman Animations, have used a variety of presentational techniques to construct a contrast between the main characters, Ginger and Mrs Tweedy. Through this they can then create another relationship between the audience and the main characters, which is to feel for the good ones and be almost frightened by the evil ones. Working with the aim of trying to satisfy the target audience, young children, the producers have performed the masterpiece of generating these relationships simply but effectively. As soon as the first scene opens, the audience are able to see that the set is not lit at all, initiating to us that evil is surrounding or enclosed into the setting. Even though it is dark, the first chicken we meet is brightly lit from the front ,showing her whole body, which creates the effect that she is good. This chicken, Ginger, who the audience later finds is highly influential on the other chickens, is our protagonist. Ginger is always lit from the front and the audience very rarely, if at any moment, view her in shadows or lit from behind. She is often filmed from a mid shot at a high angle or at eye level. This is to portray that she is small but, because she is lit from the front, we can still see that she is dominant and good. ...read more.

This shows that she has the will to escape and help the other chickens. Her mouth is never turned down in a sad way, meaning that she is very happy and good. She moves about in a very quick pace, like she wants to get on with something and the sound of her feet is a tiny patter. She is not big but we can see from other aspects that she is good. Ginger is very patient with the other chickens, but sometimes she can become a bit frustrated when the chickens cannot do something, but this signifies that she wants the chickens to escape with her. Most times she has already escaped by herself, but if the others are caught or stuck, she will go back and help them. The sound effects and the music in this film are so important to the script that you only really notice some of them when you are listening for them. The main theme for the film is, in itself, another form of parody of The Great Escape. This theme is then interpreted to reflect on the character we are looking at or focusing on. The only real Non-Diagetic sound used in this film is the music. This is because the target audience, young children, find it hard to determine the difference between Diagetic and Non-Diagetic sounds. ...read more.

The audience are able to see the whole of Ginger symbolising that she is very upfront and big, even though she is a chicken. The costume that Mrs Tweedie wears is very different to that of Gingers. Firstly she is a human so she has to wear some form of clothes. But it is the type of costume and the way she is wearing it that make the audience tell she is evil. Mrs Tweedie wears a very stiff, upright dress, portraying that she wears a uniform and is evil. The colour of her clothes is very much the same as her furniture; dull and dark. Her hair is tied back into a tight bun and wears big black boots that were worn by n**i Leaders, signifying she is not good. Also, her sleeves are rolled up as if she is about to work or take some evil action. Using these presentational devices, Aardman Animations have effectively shown the good and the evil in the two main characters. They have done this using every aspect they can. They have used the camera angles superbly as well as the lighting on the characters. My personal opinion is that they have created a wonderful masterpiece of presenting good and evil in tiny plasticine figures. This film was a brilliant success for the producers. ...read more.