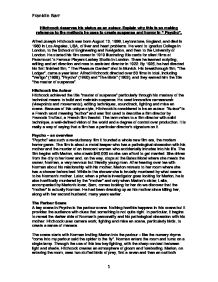 Hitchcock deserves his status as an auteur. Explain why this is so making reference to the methods he uses to create suspense and horror in

Hitchcock deserves his status as an auteur. Explain why this is so making reference to the methods he uses to create suspense and horror in " Psycho". Alfred Joseph Hitchcock was born August 13, 1899, Leytonstone, England, and died in 1980 in Los Angeles, USA, of liver and heart problems. He went to Ignatius College in London, to the School of Engineering and Navigation, and then to the University of London. He started his film career in 1919 illustrating title cards for silent films at Paramount 's Famous Players-Laskey Studio in London. There he learned scripting, editing and art direction and rose to assistant director in 1922. By 1925, he had directed his first finished film, " The Pleasure Garden" shot in Munich. His breakthrough film, "The Lodger", came a year later. Alfred Hitchcock directed over 50 films in total, including "Vertigo" (1958), "Psycho" (1960) and "The Birds" (1963), and they earned him the title "the master of suspense". Hitchcock the Auteur Hitchcock achieved the title "master of suspense" particularly through his mastery of the technical means to build and maintain suspense. He used innovative camerawork (viewpoints and movements), editing techniques, soundtrack, lighting and mise en scene. Because of this unique style, Hitchcock is considered to be an auteur. "Auteur" is a French word meaning "author" and was first used to describe a film director by Francois Truffaut, a French film theorist. The term refers to a film director with solid technique, a well-defined vision of the world and a degree of control over production. ...read more.

The tension is released, however. Norman admits to having similar thoughts and he leans back and forward a couple of times and smiles. Finally, Marion stands up to leave. Hitchcock uses a brightly-lit, low angle shot to restore her to the dominant role. She stands in front of the picture, which has almost the look of a halo around it. Norman is now made to appear submissive through the use of a high angle shot. Although the roles appear to have switched, however, behind Marion is a raven, with its beak pointing down at her neck and casting a shadow on the wall. This example of mise en scene is employed to disturb any relief the audience may feel about a return to normality. Shower Scene The shower scene is where the first murder takes place. Marion has decided to return the stolen money. She works out how much she has spent of it on a piece of paper which she then rips up and disposes of by flushing it down the toilet. She follows this resolution by having a shower which she enjoys as it is like the washing away of her guilt. She is smiling to herself on her own "private island", oblivious to what the audience can see: a silhouetted figure behind the shower curtain. The figure moves slowly towards the woman, and the audience, rips back the curtain, raises a knife and stabs Marion repeatedly to the strains of screeching violins and the victim's screams. The scene is one of utter terror. ...read more.

Then she sees her boss while driving out of the city which adds to the likelihood that she might get caught. Another is when she is stopped and then followed by the policeman, which builds up suspense but again has nothing to do with the main plot. Also, continual imagery of holes and disappearances is unconventional starting with Marion flushing evidence down the toilet, which represents the flushing away of her guilt. There is also the blood circling down the plughole which symbolises her life going down the drain. Finally, the car containing Marion's body and the $40,000 disappearing into the swamp indicates the crime is closed. The use of mirrors creates a sense of danger. First, there is the mirror in her car when she sees the policeman following her, then the policeman's glasses and finally the mirror in Mrs Bates bedroom. The first two examples also reflect back guilt. The sense of danger builds suspense even though none of the examples leads to anything. There are other ways in which Hitchcock broke with convention. He shows the leading actress semi-nude in a bedroom after just having had sex. Later, he shows her in the shower and finally he eliminates her, one of the main characters, only 47 minutes into the film. Conclusion I think Alfred Hitchcock deserves his status as an auteur because he introduced a distinctive style to cinema and his unconventional approach revolutionised horror films. His innovative camerawork (viewpoints and movements), editing techniques, soundtrack, lighting and mise en scene are what differentiated Hitchcock's films from those of earlier directors. Also, his films used intricate plots. Franklin Barr 1 ...read more.