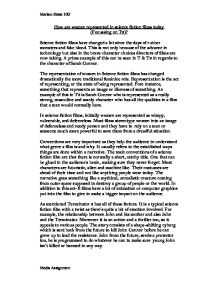 How are women represented in science fiction films today

How are women represented in science fiction films today (Focussing on T2)? Science fiction films have changed a lot since the days of rubber monsters and fake blood. This is not only because of the advance in technology but also in the brave character choices directors of films are now taking. A prime example of this can be seen in T & T2 in regards to the character of Sarah Connor. The representation of women in Science fiction films has changed dramatically the more traditional feminine role. Representation is the act of representing, or the state of being represented. Fore instance, something that represents an image or likeness of something. An example of this in T2 is Sarah Connor who is represented as a really strong, masculine and manly character who has all the qualities in a film that a man would normally have. In science fiction films, initially women are represented as wimpy, vulnerable, and defenceless. Most films stereotype women into an image of defenceless and needy person and they have to rely on a man or someone much more powerful to save them from a dreadful situation. Conventions are very important as they help the audience to understand what genre a film is and why. It usually refers to the established ways things are done within a narrative. The main conventions of a science fiction film are that there is normally a short, catchy title. ...read more.

At first Sarah is frightened of the machine that is set out to protect John. She doesn't believe that he really is programmed to save her son. However, she learns to work with the robot instead of against it. On the other hand she has the evil terminator who is set out to do everything in its power to eliminate John. Linda Hamilton (Sarah Connor) shows how much she despises it from the moment she sees him. You can see the expression on her face but she is also scared of it and has an idea of what it is capable of. She takes it upon herself to get a gun and shoot the terminator until it's destroyed. This is a contrast between the relationships she has with the two machines and how her character is both strong and sensitive. When Sarah is first presented on screen she is shown in a mental institution doing pull ups. She looks scruffy and inhumane. The authorities display her as a mad woman, a psycho, delusional and a dreamer. They treat her as if she's made up everything about the machines and judgement. She is given medication that she refuses to take so as a result of this she is beaten up and treated like a wild animal. This is not how a female character in a film is normally treated. ...read more.

In the film terminator this is shown when she decides to go and hunt for Dr. Miles Bennett Dyson to kill him and hopefully try to prevent the war between man and robots happening. She sees Dr. Bennett's son and wife and she can't shoot him, there is some kind of human emotion shown there which tells the audience that even though she got hold of a gun and set out to take Dr. Bennett's life she wasn't able to pull the trigger and kill him. There are numerous reasons why Sarah stopped herself from pursuing this plan of action, firstly Dr. Bennett's son stood in front of his father and protected him from the bullet, the young boy started to scream out, "NO! Don't shoot my daddy! NO! Don't shoot!", then John (Edward Furlong) came with the terminator (Arnold Schwarzenneger) and stopped his mum from doing something she will regret. The representation of women in science fiction films can be seen to be both positive and masculine in some cases. The clich� that women are peony, helpless and vulnerable people who can't defend themselves is wrong and although some people might fall into this category many don't. The movies like Terminator 2 and Alien prove that women can be successfully represented in a both positive and masculine way. Ultimately women can do everything men can do. If not better. Ultimately all movies will portray women in their true form.....hopefully. ?? ?? ?? ?? Mariam Ezzat 10U Media Assignment ...read more.