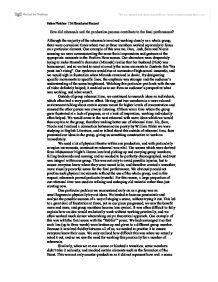 How did rehearsals and the production process contribute to the final performance?

How did rehearsals and the production process contribute to the final performance? Although the majority of the rehearsals involved working closely as a whole group, there were occasional times where two or three members worked separately to focus on a particular element. One example of this was me, Dan, Josh, Sam and Nicole ensuring we were communicating the same facial expressions and gestures at the appropriate moments in the Positive Hour scenes. Our characters were desperately trying to make Hannah's character (Miranda) realise that her husband (Nick) was homosexual, and so we had to react at exactly the same moments to illustrate this "his yeast isn't rising". Our eyebrows would rise at moments of high sexual innuendo, and we would sigh in frustration when Miranda remained in denial. By designating specific movements to specific lines, the emphasis was stronger and the audience's understanding of the scene heightened. Watching this particular part back with the use of video definitely helped; it enabled us to see from an audience's perspective what was working, and what wasn't. Outside of group rehearsal time, we continued to research ideas as individuals, which often had a very positive effect. ...read more.

This led to a great deal of frustration at times, yet as our piece progressed, we saw the benefit more and more, and group members became less cynical. It was often difficult to fully explain how an idea would realistically work without working practically, and we often worked much slower when taking only a theoretical approach. One example of this was with the final scene with the "Babble'" poem. We had rearranged it so that each line (up to three words) were broken up and given to a different group member. Because it involved fluidity between all of us, we needed to practise it to ensure everyone knew their cues. We only realised how difficult this was when we actually acted it out, and so we saw the need for working this practically for a number of rehearsals. Similarly, when we re-ran a scene or blocked a transition, some members didn't take it seriously, and mocked certain elements such as the formation of the Beast. This was not only counter-productive as it did not represent how well a scene would actually work, but also led to something becoming comic within the group, and therefore limiting the impact of the scene, and wasting valuable rehearsal time. ...read more.

This meant there were now moments of silence in our relatively high-energy, fast-moving piece which really helped to focus and communicate our intentions effectively, as well as really ensuring the audience saw the difference between the scenes and characters. Being able to watch back the videos of our work in progress was definitely an asset, and one that we readily used. Seeing our piece from an audience's perspective was incredibly important, and we could easily evaluate the effectiveness of certain elements. Similarly, if one group member did not play a major part in a scene, we would occasionally have them watch it as an audience member. Steph, and others did this at several points, checking our projection and that the staging was effective, ensuring no-one was being blocked. It was often hard to view our piece objectively after working on it for so long, and so moments like these were really beneficial. In the last few days before the exam, we worked in full costume and with sound and lighting, which helped dramatically. It allowed us to fully immerse ourselves in our characters, and working with technical elements meant the atmosphere was exactly how it would be in the exam. Helen Fletcher 13A Structured Record ...read more.