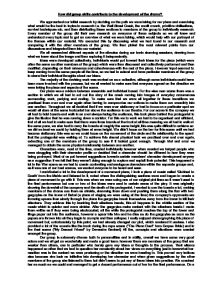 How did group skills contribute to the development of the drama? We approached our initial research by deciding on the path we were taking for our piece and examining what would be the best to topics to research i.e. the Wall Street Crash, the credit crunch, primitive civilisations, survival techniques etc. and then distributing these sections to members of the group to individually research. Every member of the group did their own research on everyone of these subjects so we all knew and understood every topic and to get an overview of what we were taking, which would help with our portrayal of the themes within our material. We executed this by discussing what we had found in our research and comparing it with the other members of the group. We then picked the most relevant points from our discussions and integrated them into our material. We all researched different aspects of the stimulus during our brain storming sessions, drawing from what we knew about the image and then exploring it independently. Ideas were developed collectively, individuals would put forward their ideas for the piece (which were often the same as other members of the group) which were then discussed and collectively performed and then modified, depending on their relevance and cohesiveness with the rest of the piece. However input seemed to keep coming from the same people all the time, so we had to extend and force particular members of the group to share their individual thoughts about our ideas. ...read more.

They achieve this by touching their attackers heads, this all happens in the middle section of the music which is quieter and more sinister. After the gargoyles make contact with the attackers heads I made them writhe as if they were being electrocuted, all the while the protagonist reaches the top of the tower and flings paper out into the audience, however a spear hits him and he dies as do the gargoyles as soon as the papers are thrown into air they begin to crumple and then collapse. I really enjoyed choreographing this piece of movement but, unfortunately by this point, we had already changed our plot, which rendered it useless. I also provided a lot of the sounds like the track during the r**e scene ("The Piano Duet" from Corpse Bride) and in the final scene ("My Dearest Friend" by Devendra Banhart) All the, concepts and situations were created amongst the group. Our group is extremely diverse both in personalities and in ability, overall we have some very good actors and we all get on wonderfully and made a good team, however there are members of the group that are weaker than others, one in particular who barely gave any ideas or thoughts to the process. Their silence happened so often that we had to question her constantly about her views on everything just to know what her reaction was to the content we were producing or the direction we were heading in. This proved very tedious also because she took no initiative into developing her character and when given suggestions by the other members of the group she listened to them but didn't seem to put any of these ideas into practise. ...read more.

A character that, if taken out of the scene, could stand by themselves and have a background giving more depth to the madness. At the beginning of the process when we seemed to keep brainstorming and discussing things rather than being spurred into action and, if we did create something that was bad suggestion in the first place, we didn't question we went along with it. We were more concerned about not getting into an argument that we didn't tell one another if we thought an idea wasn't good, instead we suggested more ideas. That sometimes you have to tell people if an idea won't work and don't get worried if someone's annoyed at you, it is better to create a good piece of drama that can lead you in a great direction after having a falling out than coming up with a rubbish idea that doesn't hold together as a piece of theatre. We all did our bit to collaborate on design ideas this was so we could perform with the set, lighting and music that we all wanted so that we could perform in an ideal space that the group collectively designed. There was a big difference between group skills in rehearsal to performance, in rehearsal we were a lot more calm about everything and kept a very relaxed group dynamic but, only as it came to the dress and tech rehearsals did we start buckling down and making sure everyone's focus was impeccable and that we were all doing this for each other, to stand as a collective rather than individuals as this was the only way our marks would be better. ...read more.