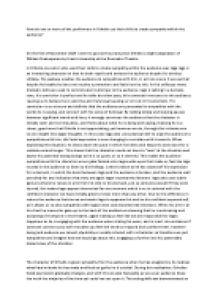 How do one or more of the performers in Othello use their skills to create sympathy within the audience?

﻿How do one or more of the performers in Othello use their skills to create sympathy within the audience? On the 5th of November 2014 I went to go see the production Othello a slight adaptation of William Shakespeare by Frantic Assembly at the Doncaster Theatre. In Othello one actor who used their skills to create sympathy within the audience was Iago.Iago is an interesting character on that he both repells and attracts the audience despite his obvious villliany. His jealousy enables the audience to sympathise with him, in act one scene 1 we see that despite his loyalty he does not receive a promotion and feels hurt by this. In this soliloquy many dramatic skills are used to commincate his distress to the audience. Iago is talking in a delicate tone, his conviction is perfect and he talks at a slow pace, this connotes innocence to the audience causing us to believe he is sensitive and truly loyal causing us to trust in his emotions. His conviction is so scincere and definite that the audience are persuaded to empathise with the words he is saying, and connect with his sense of betrayal. ...read more.

Iago also uses subtle gesture where he raises on arm from his side to his stomach, just as someone would if they were injured, this makes Iago appear introverted for one moment which is so in contrast with the confident character we have initially grew to know more than any other. Due to this difference in nature the audience feels tense and wants Iago to appease this and be his confident exposed self, as it allows us to also sympathise with Iagos tense and discontented emotions. When his arm is at his chest he moves his gaze up to the back of the auditorium showing that he is embracing and accepting of everyone in the theatre, again making us feel like we are responsible for Iagos happiness as he is engaging with the audience when stating his woes, and in most circumstances if someone comes to you with troubles you feel the need to respond and comfort them, however being and audience we cannot physically or vocally interact with a character so therefore we just sympathise and imagine how we would go about this, engaging us further into his potentially biased view of the situation. ...read more.

He no longer sees him self as a human but the devils subject as Emelia shouts satan at Iago. We sympathise with Orthello as we too trusted in Iago to begin with and saw why he murder her however he was tricked. He was infact human all the tine experiencing jealousy and allowing this to enable others to manipulate his actions. He was vulnerable, and as a vulnerable character we can not help and feel unable to adequately respond, therefore are trapped with Othellos guilt, showing we truly empathise with him. His depleting volume in vocal tones correlate with our emotions fortifying that we sympathise with his feelings. His agressive load tones, resonates with our frustration as an audience, watching the his uncontrolled demise unfold. Then his bold statements show his raw emotion and hid weak position saying he will die due to this man's physical strength and now vulnerable mentality we to realise that bone of his frivolous superficial entities are relevant, and he has created for himself a bitter futile existence with this in mind we understand and sympathise with his suicidal actions. ...read more.