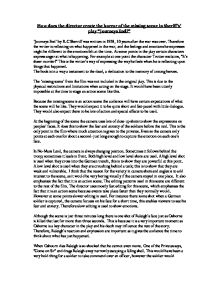 How does the director create the horror of the missing scene in Sheriff's' play &quot;Journeys End?&quot;

How does the director create the horror of the missing scene in Sheriff's' play "Journeys End?" 'Journeys End' by R.C Sherriff was written in 1928, 10 years after the war was over. Therefore the writer is reflecting on what happened in the war, and the feelings and emotions he expresses might be different to the emotions felt at the time. At some points in the play certain characters express anger at what is happening. For example at one point the character Trotter exclaims, "It's sheer murder!" This is the writer's way of expressing the way he feels when he is reflecting upon things that happened. The book is in a way a testament to the dead, a dedication to the memory of unsung heroes. The 'missing scene' from the film was not included in the original play. This is due to the physical restrictions and limitations when acting on the stage. It would have been utterly impossible at the time to stage an action scene like this. Because the missing scene is an action scene the audience will have certain expectations of what the scene will be like. They would expect it to be quite short and fast-paced with little dialogue. They would also expect there to be lots of action and special effects to be used. ...read more.

The privates' uniforms blend with these colours, as their uniform is dark green. The only colour that stands out from the rest is the white colour of the officers' trousers. This symbolises the fact that the officers stand out from the rest of the soldiers as they have a higher social status. This creates social contrast between them and the rest of the soldiers. It also helps the audience to track the officers' progress. One image that the camera focuses on is the barbed wire surrounding the trenches. It creates a very stark bleak picture against the grey/white background. When the soldiers are in the trench it is a barrier that protects them from the enemy, however when they are in no-mans land the wire becomes a barrier preventing them from getting back to safety. I think this image is used as it is unnatural and suggests death and imprisonment. The barbed wire also separates the audience from the actors, and suggests that the audience is in the trench with the other soldiers looking out onto No-Mans Land. Another powerful image that is used is the bare trees in No-Mans Land. The trees are stripped of bark and completely lifeless. This signifies that nature is dead and all life is gone and therefore that they too will soon die. ...read more.

I feel that the play appeals to all audiences, both the original and modern day because people can relate to the characters and understand their feelings even if they do not have first hand experience of the war. I think that when all devices of the scene are put together, it creates a very tense and moving drama. When one element is taken out it does not work nearly so well, for instance the scene with no sound at all is nowhere near as effective. This is because although in some parts of the scene there is complete silence, this contrasts with the loud music in other parts of the scene. If there was no sound at all there would be no contrast so the scene would be less interesting. Without colour the scene would seem very lifeless because although most of the colours are dull and bland this gives contrast to bright colours like the officers trousers and makes the audience focus on the images rather than the colour. The director has managed to adapt an old fashioned play into a gripping drama suitable for a modern audience of most ages- by using music, special effects and symbolic images. I enjoyed watching this scene and I found it tense and really dramatic. I feel that the director has produced a scene that captures the audience and compels them to watch further. ...read more.