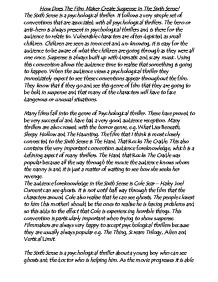 How Does The Film Maker Create Suspense In The Sixth Sense?

How Does The Film Maker Create Suspense In The Sixth Sense? The Sixth Sense is a psychological thriller. It follows a very simple set of conventions that are associated with all psychological thrillers. The hero or anti-hero is always present in psychological thrillers and is there for the audience to relate to. Vulnerable characters are often depicted as small children. Children are seen as innocent and un-knowing, it is easy for the audience to be aware of what the children are going through as they were all one once. Suspense is always built up with dramatic and scary music. Using this convention allows the audience time to realise that something is going to happen. When the audience views a psychological thriller they immediately expect to see these conventions appear throughout the film. They know that if they go and see this genre of film that they are going to be held in suspense and that many of the characters will have to face dangerous or unusual situations. Many films fall into the genre of Psychological thriller. These have proved to be very successful and have had a very good audience reception. Many thrillers are also crossed with the horror genre, e.g. What Lies Beneath, Sleepy Hollow and The Haunting. The film that I think is most closely connected to the Sixth Sense is The Hand That Rocks The Cradle. This also contains the very important convention audience foreknowledge, which is a defining aspect of many thrillers. The Hand that Rocks The Cradle was popular because all the way through the movie the audience knows whom the nanny is and it is just a matter of waiting to see how she seeks her revenge. The audience foreknowledge in the Sixth Sense is Cole Sear - Haley Joel Osment can see ghosts. It is not until half way through the film that the characters around Cole also realise that he can see ghosts, The people closest to him (his mother) ...read more.

In many films the use of camera angles is significant when trying to define the mood or impending events. Throughout the Sixth Sense an array of strange and unnatural camera angles are used to show the audience that the characters within the film are dealing with supernatural forces. In one scene the camera is positioned so that it is looking completely up the middle of a flight of stairs. This is a view that the audience would not expect to see, and so leads them to expect that a dangerous situation is going to arise. This technique is used very effectively in the film, Anaconda. It is used here to show the snake watching his victims. Many point of view shots of animals use strange camera angles. At the start of the film when Dr. Crowe gets shot the director has used an aerial shot to emphasise the fact that the events that have just taken place wouldn't normally happen. Most shots are at eye level just like you would see something in real life, and so when it changes there is going to be a very abnormal event coming. In many scenes it is easy to analyse how the directors have used the characters or props or camera angles to enhance a feeling of suspense. Scene 1: Man in bathroom, broken glass, telephone off the hook. This scene shows the happy couple (Malcolm and his wife) in their own house, having fun. This is beginning to paint a picture of their home life and also shows that they feel safe inside their own house. This illusion of happiness is broken when they go upstairs. The window is broken and the telephone is off the hook. This immediately shows the audience that someone is inside their house. The next shot shows a man standing inside the bathroom wearing only his underwear. The reaction from the audience will be that this man is a bit unstable. ...read more.

This allows the audience to see all of the clues that they missed. Using this type of ending is also a way of making the audience want to see the film again. They will go to see the clues and why they missed them the first time round. They will also go to make sure that the filmmakers haven't slipped up anywhere and that Malcolm's ghost does follow the rules, e.g. no shadow. The twist is an advertising strategy and people who've been to see the film will tell their friends that the twist is really good and that they should go to see it. This film is a typical example of the psychological thriller genre. It includes all of the main elements e.g. hero/ anti-hero, victim, and is exciting but still scary. I personally enjoy this type of movie because it is completely different to the world that we actually live in. When you watch these films it makes you wonder if this has or could ever happen in the real world. Although many films that I have seen include things that would never happen (Sleepy Hollow, The Haunting), some films do in a very abstract way represent real life issues e.g. Scream. Serial Killers do exist and so the Scream Trilogy is not altogether that far away from real life. These types of films give you an extra scare, as they could have happened. Another popular genre of film is comedy and so when the two genres are crossed the films created are usually very well received. The film Scary Movie was a huge hit in both the UK and America as it made the audience laugh as well as scare them. The Sixth Sense was a huge success because it was an original story and especially because of the twist at the end. It made a large impact on the audience that went to see it because it was new and exciting. Although the psychological thriller genre has been around for a long time, The Sixth Sense revived it. ...read more.