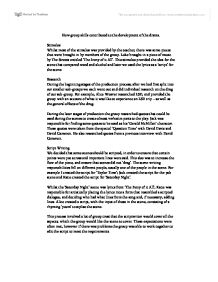 Whilst most of the stimulus was provided by the teacher, there was some pieces that were brought in by members of the group. Luke brought in a piece of music by The Streets entitled ‘The Irony of it All’. This stimulus provided the idea for the scene that compared weed and alcohol and later we used the lyrics as a ‘script’ for the scene.

During the beginning stages of the production process, after we had first split into our smaller sub-groups we each went out and did individual research on the drug of our sub-group. For example, Alice Weaver researched LSD, and provided the group with an account of what it was like to experience an LSD trip – as well as the general effects of the drug.

During the later stages of production the group researched quotes that could be used during the scenes to create almost verbatim parts to the play. Jack was responsible for finding some quotes to be used as his ‘Gerald McMillan’ character. These quotes were taken from the special ‘Question Time’ with David Davis and David Cameron. He also researched quotes from a previous interview with David Cameron.

Whilst the ‘Saturday Night’ scene was lyrics from ‘The Irony of it All’, Katie was responsible for artistically placing the lyrics into a form that resembled a scripted dialogue, and deciding who had what lines from the song and, if necessary, adding lines. Alice created a script, with the input of those in the scene, consisting of a rhyming ‘poem’ to stylise the scene.

This process involved a lot of group trust that the scriptwriter would cover all the aspects, which the group would like the scene to cover. These expectations were often met, however if there was problems the group was able to work together to edit the script to meet the requirements.

During the rehearsals, we split into several groups, and each had a drug to create scenes for. Each pair was asked to create several scenes each lesson. Once these aims had been met we met together and allowed the others to give their input. For each story we attempted to create a ‘positive’, ‘negative’ and a ‘turning point’.

This process involved all of us separately, sometimes due to the crossover in the use of actors in different scenes those that weren’t in the scene often helped create scenes for the other groups. For example Katie helped to create scenes for Jack and Saimon, involving a news reporter and a cocaine-addicted rock star. These scenes formed the basis of the scenes involving ‘Jane Doe’ and ‘Gerald McMillan’ that were created at a later date.

When we completed the scenes each lesson we came back together and performed our scenes to the rest of the group. The group was able to give directorial points of view as to what would make the scene more effective – or to suggest ideas for scenes that may be based on the scene created that may be better for the final production.

During the later stages of production, when many rehearsals were done as a complete group, those not involved in the scenes could watch and suggest improvements. This again resulted in a lot of trust, as we had to rely on the directors to shape the scene in a way that would portray our message.