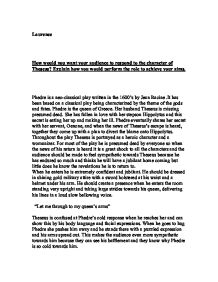 How would you want your audience to respond to the character of Theseus? Explain how you would perform the role to achieve your aims.

Laurence How would you want your audience to respond to the character of Theseus? Explain how you would perform the role to achieve your aims. Phedre is a neo-classical play written in the 1600's by Jean Racine .It has been based on a classical play being characterized by the theme of the gods and fates. Phedre is the queen of Greece. Her husband Theseus is missing presumed dead. She has fallen in love with her stepson Hippolytus and this secret is eating her up and making her ill. Phedre eventually shares her secret with her servant, Oenone, and when the news of Theseus's escape is heard, together they come up with a plan to divert the blame onto Hippolytus. Throughout the play Theseus is portrayed as a heroic character and a womanizer. For most of the play he is presumed dead by everyone so when the news of his return is heard it is a great shock to all the characters and the audience should be made to feel sympathetic towards Theseus because he has endured so much and thinks he will have a jubilant home coming but little does he know the revelations he is to return to. ...read more.

Hippolytus tries to responds to his father but is cut short by Theseus storming out of the room in a rage in search of Phedre. When Theseus next enters with Oenone, she has told him the truth about Hippolytus's desires. He is absolutely beside him self with rage. He can grab Oenone and shake her as if he is trying to shake the truth out of her but when he sees Hippolytus in the distance he pushes Oenone to one side and draws his sword as if he is going to kill him, thinking better of it when he approaches so re-holstering the sword and just grabs him and pushes him up against the wall. Hippolytus is now puzzled because he doesn't know that the queen has accused him and is displeased that his father is angry with him. Hippolytus's innocence only infuriates Theseus more and he should start to push Hippolytus around the room and pick up items off the table to throw at him. When Theseus prays to the God Neptune to take revenge on his son he can sink to his knees and hold his arms aloft. ...read more.

The audience's ambivalence should be played on in this speech by Theramene. "Ah- so much concern Coming so late and so superfluously. Such paternal love. And all so useless" While Theramene is recounting his story Theseus is seated and can be mindlessly pouring wine into a glass that can start to overflow. His facial expression is one of shock with a fixed stare ahead. After the tale's conclusion, Theseus should rise slowly with his head hung and place his hand on Theramene's shoulder showing that he doesn't blame him for his son's death. With Hippolytus dead and Phedre's betrayal at the very end when Theseus goes off to mourn over his son's body, I would want the audience to feel sorry for him because of what he has been through and his new found dignity in pronouncing Aricia a member of his family. "Aricia, from today you are my daughter" p81 I would hope that by portraying Theseus at times confident, baffled, frustrated, violent, griefstricken and finally dignified, I would make the audience experience a range of emotions that would intensify their enjoyment of the production. ...read more.