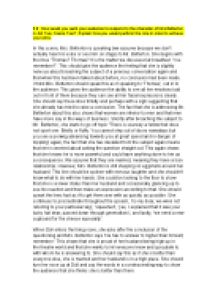 How would you want your audience to respond to the character of Mrs Betterton in Act Two, Scene Two? Explain how you would perform the role in order to achieve your aims.

﻿1 2 How would you want your audience to respond to the character of Mrs Betterton in Act Two, Scene Two? Explain how you would perform the role in order to achieve your aims. In this scene, Mrs. Betterton is speaking (we assume because we don?t actually hear his voice or see him on stage) to Mr. Betterton. She begins with the lines ?Thomas? Thomas? It is the matter we discussed at breakfast. You remember??. This should give the audience the feeling that she is slightly nervous about broaching the subject of a previous conversation again and that when this had been talked about before, no conclusion had been made. I think Mrs. Betterton should speak this as if speaking to ?Thomas?, out in to the audience. This gives the audience the ability to see all her emotions laid out in front of them because they can see all her facial expressions clearly. She should say these lines timidly and perhaps with a sigh suggesting that she already has tried to raise a conclusion. The fact that she is addressing Mr. Betterton about this also shows that women are inferior to men and that men have more say in the ways of business. Shortly after broaching the subject to Mr. Betterton, she starts to go off topic ?There is scarcely a fellow that does not sport one. ...read more.

We know this because she says ?It keeps weary hands occupied during long plays when ones appearance is minor?. Here we see that she is no longer being given large parts and has to use something as cheap and uninteresting as yarn to keep herself occupied. The audience should feel sorry for her in this part of the scene and realise that she really loves acting and that without it she hasn?t got much to live for in her life. Mrs. Betterton should be getting teary in this small speech because it has also dawned on her that she can?t do the same job that she has been doing for so many years. Mrs. Betterton then starts to speak about hearing voices, this gives the audience an idea that she might be going a little crazy in the head, perhaps from old age or from depression ect. Mrs. Betterton says her wedding ring was ?in the slops bucket?, this gives the audience the impression that perhaps her marriage is failing and that the slops bucket signifies her an Mr. Betterton?s relationship. As she says this whole section, she should be getting increasingly more and more vague giving the impression that it could all be a dream and she?s not really hearing voices at all. She should be pacing up and down the stage and changing the pitch of her voice as if she is losing control over her body and vocals. ...read more.

The next part of the scene is the most shocking in my opinion. We see different sides of all the women, especially Mrs. Farley and Mrs. Marshall. At the beginning of this section they are all talking about giving Mrs. Farley an abortion and we see an all-knowing side of Mrs. Betterton. ?There?s no choice in the matter? this suggests that she may have been through a similar thing herself in previous years or perhaps that she has seen other women have the same thing done. This is designed to shock the audience because they realise that there is not a chance Mrs. Farley can keep her job. Mrs. Betterton should say these lines with regret but with determination and should be seen that she actually wants to help Mrs. Farley out of the situation she is in. Mrs. Betterton?s last line in this scene is ?its very pretty, but not to my particular taste? ? she doesn?t buy the petticoat from Mrs. Farley because she believes that she could help her better by giving her an abortion. This shows the audience that women in this age were very desperate and that for a small amount of money, Mrs. Farley is prepared to sell the items off of her back. This scene is very sad and the audience should feel pity for all the characters as they watch their fellow actress leave to what will most likely be a very difficult life on the streets of London. ...read more.