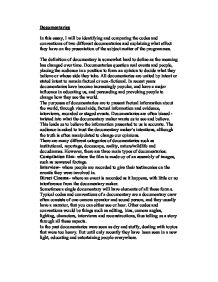 Documentaries In this essay, I will be identifying and comparing the codes and conventions of two different documentaries and explaining what effect they have on the presentation of the subject matter of the programmes. The definition of documentary is somewhat hard to define as the meaning has changed over time. Documentaries question real events and people, placing the audience in a position to form an opinion to decide what they believe or whose side they take. All documentaries are united by intent or stated intent to remain factual or non-fictional. In recent years documentaries have become increasingly popular, and have a major influence in educating us, and persuading and provoking people to change how they see the world. The purposes of documentaries are to present factual information about the world, through visual aids, factual information and evidence, interviews, recorded or staged events. Documentaries are often biased- twisted into what the documentary maker wants us to see and believe. This leads us to believe the information presented to us is accurate. The audience is asked to trust the documentary maker's intentions, although the truth is often manipulated to change our opinions. There are many different categories of documentaries such as institutional, reportage, docusoaps, reality, nature/wildlife and docudramas. However, there are three main types of documentaries: Compilation film- where the film is made up of an assembly of images, such as newsreel footage. ...read more.

The second documentary we studied was Damilola Taylor. It was about a ten year old boy who moved to an estate Peckham in England from Nigeria, and was brutally murdered by a gang of youths just a few yards from his front door. It was a reportage documentary about a real life story seen on the news: Damilola Taylor, his life, his last days and his fight for justice. I think the target audience for this documentary would be mainly adults, because some of the scenes in the documentary are too hard- hitting for children to understand, and maybe people interested in the murder case itself. In the opening scene, we start to learn a bit about Damilola, and start to build up a picture of what he was like. He is straight away presented as the innocent victim- that attracts the audience's attention because you are immediately on his side. We are shown pictures and home videos in slow motion of Damilola in happier times, before the camera flashes to his grieving parents, showing a contrast of emotions. I think the slow motion shots help to emphasize Damilola being a happy, normal boy. There are point of view shots of his parents, which help to create the factor of real tragedy. The music in the background is chilling and mournful which creates a solemn atmosphere. We are also introduced to the narrator, who gives us contextual information and a running commentary throughout. ...read more.

In boys alone, when the boys are causing mayhem and destruction in the house, chilled out and calm music is playing in the background. Both documentaries use character building to help the audience form opinions of each character. This is very important because how the characters are presented to the audience affects their views on them. For example, the Untouchables are presented as Out of control, evil and destructive, so the audience formulates an opinion of hatred on them. In boys alone, Sim is presented as an outcaste and victim of bullying by the other boys, so we feel sorry for him. Character building is a very important code and convention because it makes the audience feel more involved in the documentary, by forming emotional connections with certain characters. Overall, I think the Documentaries were very effective in attracting and sustaining the audience's attention. I think the Damilola Taylor documentary was more memorable because it was so powerful and really made me feel a variety of different emotions. I think the codes and conventions used were also very effective, such as the solemn background music, and helped to present the subject matter of the programme. Boys alone was successful in its own way: the documentary maker used a lot of editing to help the audience form opinions on each of the characters, which I thought was very effective. I found myself forming views on the characters. I really enjoyed watching both documentaries. ...read more.