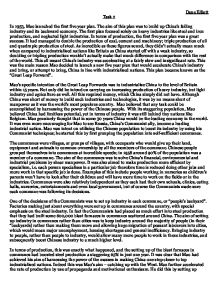 In 1953, Mao launched the first five year plan. The aim of this plan was to build up China's failing industry and its backward economy.

Dane Elliott Task 2 In 1953, Mao launched the first five year plan. The aim of this plan was to build up China's failing industry and its backward economy. The first plan focused solely on heavy industries like steel and iron production, and neglected light industries. In terms of production, the first five year plan was a great success. It had managed to double the production of coal, cement and machinery; triple production of oil and quadruple production of steel. As incredible as these figures sound, they didn't actually mean much when compared to industrialised nations like Britain as China started off with a weak industry, so doubling or tripling production wouldn't actually make that much difference in comparison with the rest of the world. This all meant China's industry was accelerating at a fairly slow and insignificant rate. This was the main reason Mao decided to launch a new five year plan that would accelerate China's industry and bring, or attempt to bring, China in line with industrialised nations. ...read more.

The communes were villages, or groups of villages, with occupants who would give up their land, equipment and animals to common ownership by all the members of the commune. Chinese people grouped themselves into communes at incredible speeds; in 1958 around 90% of the population was a member of a commune. The aim of the communes was to solve China's financial, environmental and industrial problems by shear manpower. It was also aimed to make production more efficient by specialism, i.e. each person specialises in a particular job therefore time is reduced doing other jobs and more work in that specific job is done. Examples of this include people working in nurseries so children's parents won't have to look after their children and will have more time to work on the fields or in the industries. Communes were also relatively independent as they each had their own schools, clinics, eating halls, nurseries, entertainments and even local government, but of course the Communists made sure each commune was following its decisions. One of the decisions of the Communists was to set up industry in each commune, or "people's backyard". ...read more.

Mao further accelerated the rate of production by use of propaganda and motivational enthusiasm. He did this by setting up posters and slogans around the country, as well as articles in newspapers, to persuade the Chinese people that working hard, for long hours and in horrendous weather conditions was their contribution to the country. This just shows Mao's extreme desire for China to industrialise at an amazingly fast pace, perhaps this was because of his old age or even his great enthusiasm of the relatively new idea of Communism, but whatever the case it was clear that Mao had put a huge effort into this plan, even if it was too much of an effort. In conclusion, Mao launched the Great Leap Forward in an attempt to boost China to the level of a top industrialised nation. He did this by creating self-sufficient communes, each producing its own products that would form the backbone of Chinese industry. In doing this Mao managed to stop the almost certain peasant migration into factories in cities, by creating industry in "people's backyards". Most important of all he utilised China's massive population to empower industry and combat the financial and technological problems faced. ...read more.