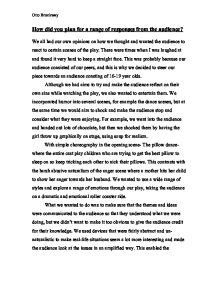 How did you plan for a range of responses from the audience? We all had our own opinions on how we thought and wanted the audience to react to certain scenes of the play. There were times when I was laughed at and found it very hard to keep a straight face. This was probably because our audience consisted of our peers, and this is why we decided to steer our piece towards an audience consting of 16-19 year olds. Although we had aims to try and make the audience reflect on their own sins while watching the play, we also wanted to entertain them. We incorporated humor into several scenes, for example the dance scenes, but at the same time we would aim to shock and make the audience stop and consider what they were enjoying. ...read more.

We wanted to use a wide range of styles and explore a range of emotions through our play, taking the audience on a dramatic and emotional roller coaster ride. What we wanted to do was to make sure that the themes and ideas were communicated to the audience so that they understood what we were doing, but we didn't want to make it too obvious to give the audience credit for their knowledge. We used devices that were fairly abstract and un-naturalistic to make real-life situations seem a lot more interesting and made the audience look at the issues in an amplified way. This enabled the audience to be able to relate to these issues and be able to think about what was and what wasn't relevant to them, for example- The greed scene- we wanted to make the audience ...read more.

We wanted the audience to look within themselves and try and realize how the sins effect everyone one to a level, whether it is suppression of the sins, or a struggle to cope with a particular one. We also wanted to show the audience how external factors can change an individuals mind in a matter of seconds- for example the gluttony scene, After the audience had stuffed themselves with our chocolate, Vicky was suddenly sick- we heard several members of the audience make noises of disgust and most people stopped eating. Overall, I feel that we got a much better reception from the audience in general than we had originally thought, and we met all of our aims, and after speaking to some of the audience afterward our message was clear and they all made up their own conclusions afterwards. Otto Brockway ...read more.