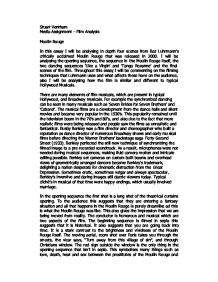 In this essay I will be analysing in depth four scenes from Baz Luhrmann's critically acclaimed Moulin Rouge that was released in 2000.

Stuart Ventham Media Assignment - Film Analysis Moulin Rouge In this essay I will be analysing in depth four scenes from Baz Luhrmann's critically acclaimed Moulin Rouge that was released in 2000. I will be analysing the opening sequence, the sequence in the Moulin Rouge itself, the two dancing sequences 'Like a Virgin' and 'Tango Roxanne' and the final scenes of the film. Throughout this essay I will be commenting on the filming techniques that Luhrmann uses and what affects these have on the audience, also I will be analysing how the film is similar and different to typical Hollywood Musicals. There are many elements of film musicals, which are present in typical Hollywood, and Broadway musicals. For example the synchronized dancing can be seen in many musicals such as 'Seven Brides for Seven Brothers' and 'Cabaret'. The musical films are a development from the dance halls and silent movies and became very popular in the 1930's. This popularity remained until the television boom in the 70's and 80's, and also due to the fact that more realistic films were being released and people saw the films as unrealistic and fantastical. Busby Berkley was a film director and choreographer who built a reputation as dance director of numerous Broadway shows and early musical films before directing the Warner Brothers' backstage saga Forty-Second Street (1933). Berkley perfected the still new technique of synchronizing the filmed image to a pre-recorded soundtrack. ...read more.

This suggests that the men are all the same and is very typical of Broadway and Hollywood musicals. The men are all wearing tuxedo's, which also suggests that they are all the same and after the same thing, sex. The music at this point is very up beat. Fat boy Slims remix of the Cancan, Madonna's 'Material Girl' and 'Entertainer' are all used to get the audience aware and involved in the film, as they know the songs. When Satine makes her entrance the dance hall falls silent. Her entrance is very important as the audience look up at her as if she was an icon such as Madonna and Kylie Minogue are today. She is dressed very different to the other courtesans. Her clothes are covered in diamantes and she has her hair down. Her outfit is very sparkly and not as 'slutty' as the other prostitutes. This relates to her 'Sparkling Diamond' title, she is much more classy. She wears a top hat, which is very masculine. Satine falls onto the men and crowd surfs, there is a birds-eye view of this shot. This sequence is both similar and different to typical musicals. The synchronized dancing is very typical of Hollywood musicals. Whereas the modern music isn't typical of musicals so this makes it different. Also the voiceovers and conversations, which interrupt the musical, too are not typical of old musicals. The 'Like a Virgin' sequence is set in the tower, which suggests fairytales but it also suggests a place of terror. ...read more.

In conclusion Luhrmann uses many techniques throughout the film. The sepia in the opening sequence and the credits at the end gives the impression of the film being historical. The big red curtains opening and closing suggest that you are entering a dream world, the world of the Moulin Rouge. The fact that throughout the film many of the characters look directly into the camera shows that they are putting on a performance. All the close up shots of the characters adds emotion to the film, the lighting creates moods for example when Satine and the Duke are in the tower the lighting is dark which suggests that something bad is about to happen. The film is similar to typical musicals of the 1920's and 30's as in many of the dancing scenes the dancers are synchronized; also the men in the Moulin Rouge wear the same. The fact that the 'baddy' of the film is portrayed as being English is similar. The Moulin Rouge is all about putting on a show which is what musicals are all about, especially Broadway musical. There is a huge element of romance throughout the film. The film on the other hand is different to typical musicals as there isn't a happy ending. Typical musicals end with, for example, the two main characters getting married or driving off into the sunset, however Moulin Rouge ends with the death of the main female character and love interest, Satine. The sepia is different to typical musicals. The prostitutes in the Moulin Rouge itself wear different clothing, which isn't seen in musicals, which adds to the films diversity. ...read more.