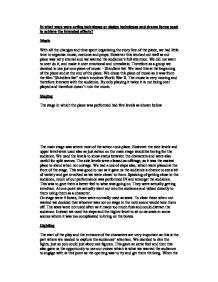 In what ways were acting techniques or design techniques and drama forms used to achieve the intended effects?

In what ways were acting techniques or design techniques and drama forms used to achieve the intended effects? Music With all the changes and time spent organising the story line of the piece, we had little time to organise music, costume and props. However this worked out well as out piece was very intense and we wanted the audience's full attention. We did not want to over do it, and make it over emotional and unrealistic. Therefore as a group we decided to use just one piece of music - Shindlers list. We used this at the beginning of the piece and at the end of the piece. We chose this piece of music as it was from the film "Shindlers list" which involves World War II. The music is very moving and therefore interacts with the audience. By only playing it twice it is not being over played and therefore doesn't ruin the music. Staging The stage in which the piece was performed had five levels as shown below The main stage was where most of the action took place. ...read more.

Instead we used the steps and the higher level to sit on as seats in some scenes where it was too complicated to bring on the boxes. Lighting The start of the play and the entrance of the characters are very important as this is the part where we needed to capture the audiences' attention. We decided to dim the lights, just so you could just about see figures. This gave an eerie feel and then this also gave us the opportunity to use our voices which is what we wanted the audience to engage with at this point as the opening was to try and get them thinking. When the action started we put the lights up a bit but still kept them quite low but enough so the audience could see our facial expressions. The purpose of the low light was to reflect the mood of the piece. We kept this light all the way through the piece. We did worry that it would be boring but it didn't seem to have any impact on the audience as a lot of the scenes were exciting and performed in the audience area anyway. ...read more.

"Maggie Flynn, died as a nurse aged 24" that is how we introduced the new characters, as if a news bulletin. We also researched speeches of the Prime minister and how he introduced the war to the country. We split this between us. The speech was long; however by using our voices wisely we were able to capture the audiences' attention. Also, monologues were used in the form of letters sent to home, reading as if they were being read or written. This added to the emotional factors of the play and let the audience in to the love of families and what they were feeling towards each other. I felt this was a successful idea as it was different than just talking to the audience. Narration Everyone was a narrator at some point in some shape or form. At the beginning of the play, in the introduction, we all were narrators at the same time. We all took it in turn to ask the audience rhetorical questions to get them involved and stops their trail of thought and puts their focus into the performance. This was also done by walking amongst the audience to create full effect. ...read more.