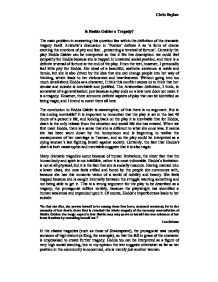 Is Hedda Gabler a Tragedy?

Is Hedda Gabler a Tragedy? The main problem in answering this question lies within the definition of the dramatic tragedy itself. Aristotle's discussion in 'Poetics' defines it as 'a form of drama exciting the emotions of pity and fear...presenting a reversal of fortune'. Certainly the play Hedda Gabler can be interpreted so that it fits this description: we could feel sympathy for Hedda because she is trapped in unwanted social position, and there is a definite reversal of fortune at the end of the play. From the text, however, I personally feel little pity for Hedda. Her ideal of a beautiful, aesthetic existence is noble and heroic, but she is also driven by the idea that she can change people into her way of thinking, which leads to her viciousness and heartlessness. Without going into too much detail about Hedda as a character, I think this conflict causes us to think that her demise and suicide is inevitable and justified. The Aristotelian definition, I think, is somewhat of a generalisation: just because a play ends on a low note does not mean it is a tragedy. ...read more.

necessity of her death, there first is revealed the whole tragedy of the uncanny contradiction of Hedda Gabler: the tragic aspect is that Hedda may only prove to herself the true existence of her inner freedom by cancelling herself out." Lou Salome In the classic tragedies (such as those of Shakespeare), the protagonist was usually someone of high stature (a King, for example), so that the fall in grace of the character is emphasised to create further tragedy. Hedda too can be interpreted as a figure of very high social standing, but in my opinion the text suggests otherwise: as far as her position in the community is concerned, she is merely just another woman. Early tragedies (as opposed to more contemporary ones) held a very moralistic learning element within them. This is true of virtually any Greek tragedy, as the audience are somewhat preached to, told that 'if you do this, then this will happen to you'. Ultimately, the tragic ending of such a play leads to a learning process that the suffering has brought about for the character. ...read more.

She perceives the problem with this society to be that they are not like her. They do not conform to her idea of a beautiful, aesthetic existence. In order for this play to be a 'Problem Play', the audience must side with Hedda, and her ideas. Thus, when Hedda realises that she is powerless to change anyone, the audience sympathises with her, and hence her death is tragic. On the other hand, if the play is presented with Hedda being uncompromising and unrealistic, childlike in her beliefs, then the audience may fail to sympathise with Hedda and the play returns to it's playwrights vision (solely depicting human beings, emotions, and destinies). The play on stage will make use of some of these ideas, as some directors choose to emphasise certain aspects of this piece. In the text, the play is two-dimensional, lifeless, and it is only on stage where we see subtext that may not have been obvious to us before. Thus, ultimately, the play's status as a tragedy can only be defined through dramatic interpretation. I've always said that the tragedy of Hedda Gabler is that she's the only woman in Scandinavia with a sense of humour. Hugh Stapleton (director of a recent Broadway production of Hedda) ?? ?? ?? ?? Chris Boylan ...read more.