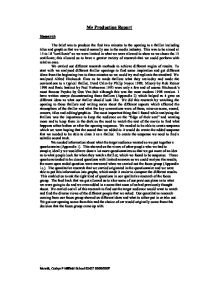 My Production Report Research The brief was to produce the first two minutes to the opening to a thriller including titles and graphics that we would normally use in the media industry. This was to be aimed at 15 to 18 "certificate" so we were limited in what we were allowed to show as we chose the 15 certificate; this allowed us to have a greater variety of research that we could perform with relative ease. We carried out different research methods to achieve different angles of results. To start with we analysed different thriller openings to find some inspiration and get different ideas from the beginning two to three minutes so we could try and replicate the standard. We analysed Alfred Hitchcock films as he made thrillers what they are today and made the conventions to a typical thriller, Dead Calm by Philip Noyce 1989, Misery by Rob Reiner 1990 and Basic Instinct by Paul Verhoeven 1993 were only a few and of course Hitchcock's most famous Psycho by Gus Van Soit although this was the more modern 1998 version. I have written essays deconstructing these thrillers (Appendix 2) which helped as it gave us different ideas as what our thriller should look like. ...read more.

This also gave a great effect of a silhouette. Our first idea was rejected as it was ambitious and logistically nearing impossible, as the location that we would have filmed at was in Yorkshire and our time plan for each person did not fit so we could not fit it in, another problem that we would have over come with our location was if we filmed something and it either did not come out or we needed to re-film it would be difficult to go back up there. So it was scrapped after we started to film and found the difficulties of it. This closely led to our second idea of which she committed suicide where she went into a room and simply died which as we lost all potential actors so the person who did this was not very elegant. This idea was embraced and quickly binned as it did not suit the atmosphere that we were trying to create. We ended up with the idea that she had kidnapped a child and was keeping him in a room in her house; we left it open ended so that the audience could guess as to what would happen next. The feedback from the audience research was useful as it helped us develop the bar scene idea other decisions that had to be made to do with music. ...read more.

If I had the chance to do the car scene again I would definitely turn the music off as it made it hard to edit and it has possible affected our grade and how we will be judged. Over all I think that we have captured the opening sequence of a thriller very well and have been able to use the conventions set by Alfred Hitchcock to our advantage and create suspense and tension in the sequence. The audience feedback that we received as a result of showing the clip to the target audience proved that we had done well but there were still things that we could have improved on, and that we did not see on the editing day. For example we did not notice that we dropped the levels to low on the car scene when it pulls up to the house and we did not synchronize well enough the feet on the gravel and made it sound to monotonous. The camera and all the other equipment had to keep going back to the studio as there were other groups that needed the equipment to film their openings. So this made it hard to manage all of the group's time and be able to have the camera at the same time. Word Count: 2,227 ?? ?? ?? ?? . Munnik, Corbyn F Millfield School 63437 26/06/2007 ...read more.