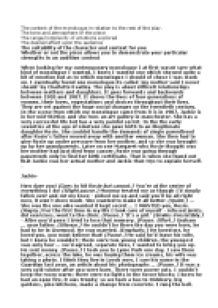 Monologue Choice. I eventually found one monologue its called 'my mother said I never should' by Charlotte Keatley. The play is about difficult relationships between mothers and daughters.

﻿The context of the monologue in relation to the rest of the play. The tone and atmosphere of the piece The range/complexity of emotions explored The desired effect upon the audience The suitability of the character and context for you Whether or not the piece allows you to demonstrate your particular strengths in an audition context When looking for my contemporary monologue I at first wasnt sure what kind of monologue I wanted, I knew I wanted one which showed quite a bit of emotion but as to which monologue I should of chose I was stuck on. I eventually found one monologue its called 'my mother said I never should' by Charlotte Keatley. The play is about difficult relationships between mothers and daughters. It goes forwards and backwards between 1905 and 1987. It shows the lives of four generations of women, their loves, expectations and choices throughout their lives. They are set against the huge social changes on the twentieth century. In the scene from which my monologue came from it is in 1987, Jackie is in her mid-thirties and she runs an art gallery in manchester. ...read more.

(Pause.) He said he'd leave his wife, but I knew he wouldn't; there were two young children, the youngest was only four ? we'd agreed, separate lives, I wanted to bring you up. He sent money. (Pause.) I took you to Lyme Park one day, I saw them together, across the lake, he was buying them ice creams, his wife was taking a photo. I think they live in Leeds now, I saw his name in the Guardian last year, an article about his photographs ? (Pause.) It was a very cold winter after you were born. There were power cuts. I couldn't keep the room warm; there were no lights in the tower blocks; I knew he had an open fire, it was trendy; so we took a bus to Didsbury, big gardens, pine kitchens, made a change from concrete. I rang the bell. (Stops.) A Punjabi man answered, said he was sorry ? they'd moved. By the time we got back to Moss Side it was dark, the lift wasn't working - (Stops.) ...read more.

The play is set in a coal mining town in South Yourkshire on a stretch down by the River Don. It is about three young women, all deeply affected by the death of a local man, all with a good reason to hate the heartless town bully, Royce Boland. The story starts to unfold through looking at each of their perspectives and series of monologues which are often addressed directly to the audience. Lynette is a working class Yorkshire woman of twenty-two. She married Royce at eighteen but has lived to regret it. She was brought up to belive that marriage is sacred and you must try your hardest to make it work. But Royce is a violent drunk man who beats, demeans and terrorises her. Royce forced her to give up her job in the coal board offices and now she stays home cooks, cleans and sometimes works in their fish tackle shop. Every now and then she shows a bleak sense of humor. There are moments throughout where she is sorry and things improve for a while. It shows in her monologue that it is true hatred that runs through her for him. Lynette- ...read more.