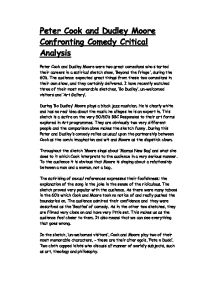 Peter Cook and Dudley Moore Confronting Comedy Critical Analysis Peter Cook and Dudley Moore were two great comedians who started their careers in a satirical sketch show, 'Beyond the fringe', during the 60's. The audience expected great things from these two comedians in their own show, and they certainly delivered. I have recently watched three of their most memorable sketches, 'Bo Dudley', un-welcomed visitors and 'Art Gallery'. During 'Bo Dudley' Moore plays a black jazz musician. He is clearly white and has no real idea about the music he alleges he is an expert in. This sketch is a satire on the very 50/60's BBC Responses to their art forms explored in Art programmes. They are obviously two very different people and the comparison alone makes the sketch funny .During this Peter and Dudley's comedy relies as usual upon the partnership between Cook as the comic imagination and wit and Moore as the slapstick clown. Throughout the sketch 'Moore sings about 'Mamas New Bag' and what she does to it which Cook interprets to the audience in a very serious manner. ...read more.

In the sketch they build up stories to make everything into big adventures in their own little world. They tell the story of how their quiet night in was ruined by Hollywood starlets visiting them. The thought of two old duffers being visited and desired by these famous starlets is incredibly funny. Moore also describes these starlets visiting them as a 'spot of the usual trouble' which is obviously unusual; this irony is too very funny. During this sketch Cook looked removed and isolated as he found it hard to learn lines and therefore looked at the camera a lot for his lines on autocue. This usually would have been frowned upon. However, it was part of him the audience had grown to like and it gives Cook his removed appearance. The third sketch I watched was, 'Art Gallery' where we again are in the company of 'Pete n Dudd'. This sketch is a satire on the role of the art critic and on every day people's responses to 'great art'. ...read more.

This ad-libbing resulted in the two corpsesing. The two were famous for it. It was usually frowned upon and considered unprofessional. However, because the two found it so hilarious the audience too found it funny. They often tried to catch each other out; this meant that anything could happen in their sketches. This appealed to their audience as it was not often done. Their personality shown through and they allowed the audience to see them as they truly are which meant the audience felt close to them. The comedy they produced was very silly, there were no punch lines. It was based solely on their irony, sarcasm and foolishness. Cook and Moore create a different world for their characters to inhabit, a 'comical wonderland'. The duo, Peter Cook and Dudley Moore, started out performing at the University of Cambridge, which they both attended and ended up the 'Beatles' of comedy. They were obviously born for comedy and worked well together, it was quite apparent they enjoyed each others company too. They relied on each others different comedy styles to produce what can only be described as wonderfully hilarious comedy. ...read more.