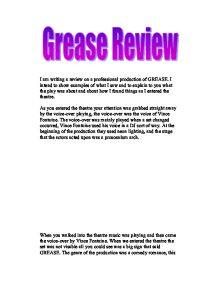 Review on a professional production of GREASE.

I am writing a review on a professional production of GREASE. I intend to show examples of what I saw and to explain to you what the play was about and about how I found things as I entered the theatre. As you entered the theatre your attention was grabbed straight away by the voice-over playing, the voice-over was the voice of Vince Fontaine. The voice-over was mainly played when a set changed occurred, Vince Fontaine used his voice in a DJ sort of way. At the beginning of the production they used neon lighting, and the stage that the actors acted upon was a proscenium arch. ...read more.

The impact of scene 1 caught the audience by bringing the story of Grease to life for example all of the men dancing in towels this was very popular for the females. During the play the actors used the Removal of the fourth wall quite a few times for example when Danny was talking about sandy he spoke directly to the audience. The production I found wasn't natural it was cartoon like. During set changes you had music or a voice-over playing. The production was pantomimic, the production was half-based on the characters and half-based on situations. The actual performance on the whole was melodramatic. ...read more.

I thought that the use of voices and the accents were excellent for example Eugene had to change his intonation. The set changes were quick quiet and slick, the way we didn't here the set changes was by the voice-over from the WAXX radio this was mainly use of repetition. There was a lot of tension in the play for example when Rizzo and Sandy were fighting, and when Danny and Sandy were pushed back together. I feel that the costume reflected the character for example Sandy had two main costume changes from the 50 style dresses to all leather smoking ear pierced rock chick. Sandy changed her hair, voice, movement, started smoking and had her ears pierced and I feel that this reflected her character. In conclusion I feel that the whole production of GREASE was absolutely brilliant. ...read more.