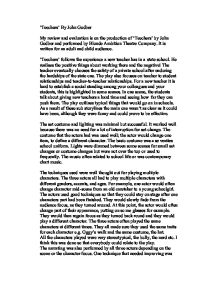 Review and evaluation on the production of 'Teechers' by John Godber and performed by Blonde Ambition Theatre Company.

'Teechers' By John Godber My review and evaluation is on the production of 'Teechers' by John Godber and performed by Blonde Ambition Theatre Company. It is written for an adult and child audience. 'Teechers' follows the experience a new teacher has in a state school. He realises the positive things about working there and the negative! The teacher eventually chooses the safety of a private school after enduring the hardships of the state one. The play also focuses on teacher to student relationships and teacher-to-teacher relationships. For a new teacher it is hard to establish a social standing among your colleagues and your students, this is highlighted in some scenes. ...read more.

The music often related to school life or was contemporary chart music. The techniques used were well thought out for playing multiple characters. The three actors all had to play multiple characters with different genders, accents, and ages. For example, one actor would often change character mid-scene from an old caretaker to a young schoolgirl. The actors used good techniques so that they could stay on stage after one characters part had been finished. They would slowly fade from the audience focus, as they turned around. At this point, the actor would often change part of their appearance, putting on some glasses for example. ...read more.

I think this production would have benefited or improved with an outside director who would spot problems easily. I enjoyed the play because it is easy to relate to on any level. My favourite moments were the scenes with the most exaggerated and stereotypical characters in, I think they made they play very amusing. The audience responded light- heartedly, laughing and to an extent interacting with the play. The mood tended to change from scene to scene depending on how the main character felt at the time, I think this worked well because it made the audience empathise with him, making them like or respond to the people he liked and disliked. The play has taught me some good techniques to use, when playing multiple characters and shown me how effective they can be. . ...read more.