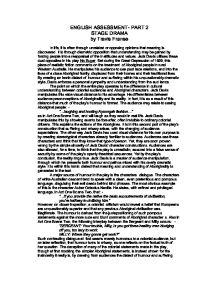 ENGLISH ASSESSMENT- PART 2 STAGE DRAMA by Travis Franse In life, it is often through unrelated or opposing opinions that meaning is discovered. It is through diametric opposition that understanding may be gained by forcing people into a reappraisal of their attitudes and values. Jack Davis utilises these dual opposites in his play No Sugar. Set during the Great Depression of 1929, this piece of realistic fiction comments on the treatment of Aboriginal people in rural Western Australia. He manipulates his audience to see past race relations, and into the lives of a close Aboriginal family, displaced from their homes and their traditional lives. By creating an ironic dialect of humour and suffering within his unquestionably dramatic style, Davis enforces a personal sympathy and understanding from the audience. The point on which the entire play operates is the difference in cultural understanding between colonial audiences and Aboriginal characters. Jack Davis manipulates this wide visual distance to his advantage. He differentiates between audience preconceptions of Aboriginality and its reality. In fact, it is as a result of this distance that much of the play's humour is formed. The audience may relate to seeing Aboriginal people: - "...laughing and hooting Nyoongah fashion..." as in Act One Scene Two, and will laugh as they would in real life. Jack Davis manipulates this by showing events be fore after, often invisible to ordinary colonial citizens. This explains the actions of the Aborigines. It is in this second part of the play's construction that suffering and misery arises, with the changing of audience expectations. ...read more.

Blunt repetition is also used to achieve the same goal. Milly's repeated request for, "...blankets . . .", in Act One Scene Seven, becomes a catalogue through which she can claim a certain degree of power. This incident is also thought humorous to a colonial audience, yet it draws attention to the base methods then used by the Sergeant to regain power, insulting her name. Jack Davis designed the scene as a string of events giving the Aboriginal characters a chance to state their legitimacy as Australian people: - "...Proper church married..." "...Not like some people, I bet." The audience is manipulated by the humorous efforts of Aboriginal characters to undermine the dominant communication, forcing them to see the play's underlying misery. While the play does focus on the white marginalisation of Aboriginal peoples, there is a flow of black dialogue that remains wholesome. This is the Aboriginal use of music and dance. As stated in Act Two Scene Six: - "You song man, you fella dance men. This still your country." Songs, especially the corroboree in Act Two Scene Six, add to the play's overtly theatrical nature, while foregrounding the new misery that has crept into Aboriginal culture. They definitely do support the Aboriginal land ties, yet they are also employed as a means of challenging white supremacy. In Act One Scene Four the Constable comments on Jimmy's harmonica, saying: - "Wish I knew how to play one of these." ...read more.

while he gives Cissie, "...yellow and red ribbons...", and Mary a, "...red dress...". These gifts not only symbolise the gift of a new future mistakenly given to them by the Europeans, but the colours used are also a link to the Aboriginal flag of modern times. These colours foreground Aboriginal land ties, and are made particularly clear to audience members by directing their attention to the play's backdrop and staging. There is a huge outpouring of emotion at the play's conclusion, and though there isn't a complete closure in terms of the plot, all the emotional strings of the play are brought together. An effective release of emotion is achieved as humour is replaced with pure suffering and misery; a development emphasised by the dramatic codes. In No Sugar, Jack Davis has created a beautifully dramatic, humorous and sensitive account of the sufferings of Australia's Aboriginal people. The play states that: "...sugar catches more flies than vinegar..." (Act One Scene Seven) and though the Aborigines are tragically never treated with the sugar of respect, Davis has kept this saying in mind with his treatment of the audience. By using the sugar of humour, Davis' catches flies of sympathy from his audience. He utilises character dialogue; develops power relations within dominant and marginalised dialogue; acknowledges and challenges colonially imposed stereotypes; employing an overtly theatrical style, all to manipulate and position his audience. After this ironic dialect of humour and suffering, audiences leave the theatre with a changed understanding of the sufferings, as well as the defiant optimism, of the Aboriginal people. ...read more.