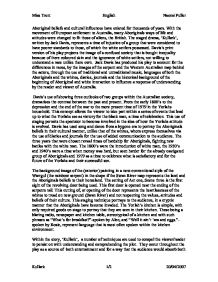 Aboriginal beliefs and cultural influences have existed for thousands of years. With the movement of European settlement to Australia, many Aboriginals ways of life and attitudes were changed to fit those of aliens, the British. The staged drama, 'Kullark', written by Jack Davis, represents a time of injustice of a group that were considered to have poorer standards to those, of which the white settlers possessed. Davis's print version of his play projects the image of a confused society that is bought inequality because of there coloured skin and the ignorance of white settlers, not willing to understand a race unlike there own. Jack Davis has produced his play to account for the differences in races, by the images of the serpent and the Western Australian map behind the actors, through the use of traditional and untraditional music, languages of both the Aboriginals and the whites, diaries, journals and the historical background of the beginning of Aboriginal and white interaction to influence a response of understanding by the reader and viewer of Australia. ...read more.

The background image of the (exterior) painting in a new-conventional style of the Warrgul (the rainbow serpent) in the shape if the Swan River map represents the land and the Aboriginals beliefs to their homeland. The setting of Act one, Scene three is the first sight of the revolving door being used. This first door is opened near the ending of the serpents tail. This cutting of, or opening of the door represents the heartlessness of the whites to tread on new ground (Swan River) and not respecting the values, attitudes and beliefs of their culture. This staging technique portrays to the audience, in a cryptic manner that the Aboriginals have become invaded. The Yorlah's kitchen is simple, with only required goods on stage to portray that they are seen in their kitchen. These being a blaring radio, newspaper and kitchen table, stereotypical of a kitchen and with such phrases as "What's for breakfast?"-spoken by Alec, and "Well it ain't 'am and eggs."-spoken by Rosie, represent language that is most often spoken within the kitchen environment. ...read more.

Act one, scene seven shows Alice reading from her diary, revealing the month and year to the audience, along with personal information that would not be necessarily bought up in the conversation with other characters. This form of writing allows the reader/viewer to become a part of the character, by being allowed to see into the head of the individual, by the use of thoughts and there creativity of what may come. This method allows for an audience to not be highly educated, by the characters on stage giving the evidence instead of the audience visualising what would or could happen. Jack Davis's play 'Kullark' is a story of inspiration, of many determined characters with a willingness to reach goals set before them. Music, props and characters help build images of times and places that were found to be of great hardship for the Aboriginals and the introduction of white man into unknown territory. The influence of this play on the viewer allows the spectator to become a more critical analysis of the events that were portrayed in the play from the early 1800's to the more present day of the 1970's. Miss Trent English Naomi Fuller Kullark 2/2 16/03/2003 ...read more.