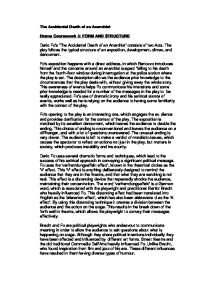 The Accidental Death of an Anarchist - Form and structure.

The Accidental Death of an Anarchist Drama Coursework 3: FORM AND STRUCTURE Dario Fo's 'The Accidental Death of an Anarchist' consists of two Acts. The play follows the typical structure of an exposition, development, climax, and denoument. Fo's exposition happens with a direct address, in which Bertozzo introduces himself and the concerns around an anarchist suspect 'falling to his death from the fourth-floor window during interrogation at the police station where the play is set. The description allows the audience prior knowledge to the circumstances that the play deals with, without giving away the whole story. This awareness of events helps Fo communicate his intensions and some prior knowledge is needed for a number of the messages in the play to be really appreciated. Fo's use of dramatic irony and his satirical stance of events, works well as he is relying on the audience to having some familiarity with the context of the play. ...read more.

This effect is a distancing device that repeatedly shocks the audience, maintaining their concentration. The word 'verfremdungseffekt' is a German word, which is associated with the playwright and practitioner Bertlot Brecht who heavily influenced Fo. This distancing effect had been translated into English as the 'alienation effect', which has also been abbreviated as the 'A effect'. By using this distancing technique it creates a division between the audience and the action on the stage. This results in the break down of the forth wall in theatre, which allows the playwright to convey their messages effectively. Brecht and Fo are political playwrights who endeavour to communicate meaning in order to allow the audience to ask questions about what is happening on stage. Although they share political intentions individually they have been affected and influenced by different art forms. Street theatre and the old traditional Commedia Dell'Arte heavily influenced Fo. ...read more.

This misunderstanding within the play uses dramatic irony, which is a classic example of farce. Fo's use of satire also uses dramatic irony, which is useful in conveying political messages. Satire is a valuable tool in getting across anger in political protest. Dario Fo use of dramatic tension is cleverly used along side these techniques. He develops the play by contrasting the dramatic elements and the energy of the play. An example of this is when he starts Act 1, Scene 2 were the Maniac is disguised and hiding a carrier bag containing a tape recorder under the desk. The scene opens in silence and involves little movement, however this movement is important to the understanding of the play. Fo then contrasts this with the end of this scene, where they sing a song. This contrast of silence and sound, energy levels high and low, which increase the excitement as it allows the play to proceed at a varied pace. ...read more.