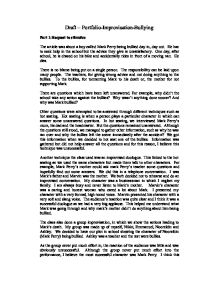 The article was about a boy called Mark Perry being bullied day in, day out. He has to seek help in the school but the advice they give is unsatisfactory. One day, after school, he is chased on his bike and accidentally rides in front of a moving van.

Draft - Portfolio-Improvisation-Bullying Part 1: Request to stimulus The article was about a boy called Mark Perry being bullied day in, day out. He has to seek help in the school but the advice they give is unsatisfactory. One day, after school, he is chased on his bike and accidentally rides in front of a moving van. He dies. There is no blame being put on a single person. The responsibility can be laid upon many people. The teachers, for giving wrong advice and not doing anything to the bullies. To the bullies, for tormenting Mark to his death or, the mother for not supporting Mark. There are questions which have been left unanswered. For example, why didn't the school take any action against the bullies? Why wasn't anything done sooner? And why was Mark bullied? Other questions were attempted to be answered through different techniques such as hot seating. Hot seating is when a person plays a particular character in which can answer some unanswered questions. In hot seating, we interviewed Mark Perry's mum, his dad and the headmaster. But the questions remained unanswered. Although the questions still stood, we managed to gather other information, such as why he was ran over and why the bullies left the scene immediately after the accident? ...read more.

In this performance, much more effort was put in and was a success, although, there was an improvement needed in the way space was used. Part 2: Development of ideas We were set the task to use the stimulus provided and any extra researched material to produce a 20-25 minute piece of TIE on bullying. "TIE" stands for "Theatre In Education" Theatre In Education is a theatre in which is created to educate its audience. My group decided not to use the stimulus or any ideas from the Mark Perry account and create our own plot based on events we'd deserved, hoping a bigger success. We decided on a plot by first deciding our target audience. Our chosen target audience was from year 6-8. The plot was three bullies picking on a new boy in school. One of the bullies is the new boy's secret friend. The main reason why the leader of the bullies is because his mum died when he was small and his dad is a drunken who beats him. The other bullies are just too afraid to stand up against the leader bully and so do what he tells them to. ...read more.

At one point, I forgot my lines and I think the group coped with that well. The entire group's weak point was facing the audience although we spent a lot of rehearsal time getting it perfect. Even though, my group had problems, the audience's reaction was better than expected. We got good feedback and advice on how to improve the performance. We used standard lights throughout the performance, costumes bet identifying our characters. Our group decided on three different pieces of music. A piece of music used to introduce our characters, a piece of music suitable for a party and one recorded by Ms. Bungen on the organs which we used to end the performance and make the audience think and feel for the victim's family. The strengths of our performance were the use of music, structure, teamwork and direction. I am also pleased to say that the whole group was dedicated and so we used our time well. If I were to re-perform this event, I would try and improve the group's physicalisation in voice, expression and both language and body language. I believe this was a success due to the original stimulus. We took ideas from it and turned them into characters. For example, the idea of a death, introduced new characters including a vicar and Grandfather. ...read more.