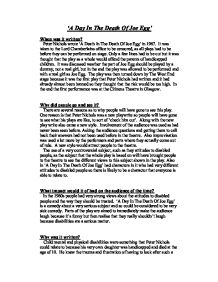 'A Day In The Death Of Joe Egg'

'A Day In The Death Of Joe Egg' When was it written? Peter Nichols wrote 'A Death In The Death Of Joe Egg' in 1967. It was taken to the Lord Chamberlains office to be censored, as all plays had to be before they can be performed on stage. Only a few lines had to be cut but it was thought that the play as a whole would offend the parents of handicapped children. It was discussed weather the part of Joe Egg should be played by a dummy, not a real girl, but in the end the play was allowed to be performed and with a real girl as Joe Egg. The play was then turned down by The West End stage because it was the first play that Peter Nichols had written and it had already almost been banned so they thought that the risk would be too high. In the end the first performance was at the Citizens Theatre in Glasgow. ...read more.

What impact would it of had on the audience of the time? In the 1960s people had very strong views about the attitudes to disabled people and the way they should be treated. 'A Day In The Death Of Joe Egg' is a comedy about a very serious subject and so could be considered to be very sick comedy. Parts of the play are aimed to immediately make the audience laugh because it's funny but then realise that they really shouldn't laugh because disabilities are a serious matter. Why was it written? Child mental and physical disabilities were something that Peter Nichols could relate to because his very own daughter was handicapped and died at the age of 10. He knew the trauma and frustration of having to look after such a child and dealing with everybody else's views. He used humour to help him get through his own personal experience so he was able to bring that out in the play. ...read more.

Despite this it is a serious play and one of the few that are around so people looking for a serious piece of stage will also look to 'A Day In The Death Of Joe Egg' although it does contain 'black comedy'. Is it set to its specific time? This play is definitely a 1960s play. When you watch it you notice that the language used is not like you would use today. Words such as spastic, cripple, etc. would not be used in today's society. Also you things like the fact that they have to walk down the road to call the hospital because they don't have a telephone. That also makes you realise that they don't have a television either. Today these objects are in practically every household. The clothes and make-up are very 60s as well. A bob hair cut, heavy black eyeliner and long, loose skirts are very 60s style. Pippa Nash 12cx ...read more.