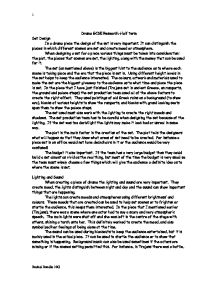 The Key Elements of a Drama Production : Characterisation, Lighting, Sound and Set Design

Drama GCSE Research-Half term Set Design In a drama piece the design of the set is very important. It can distinguish the places in which different scenes are set and create mood or atmosphere. When designing a set for a piece various things must be taken into consideration: the plot, the places that scenes are set, the lighting, along with the money that can be used for it. The set (as mentioned above) is the biggest hint to the audience as to where each scene is taking place and the era that the piece is set in. Using different height levels in the set helps to keep the audience interested. The colours, artwork and materials used to make the set are the biggest giveaway to the audience as to what time and place the piece is set. In the piece that I have just finished (Trojans-set in ancient Greece, on ramparts, the ground and palace steps) ...read more.

These moods that are created can be used to help set scenes or to frighten or startle the audience, this keeps them interested. In the piece that I mentioned earlier (Trojans), there was a scene where one actor had to say a scary and very atmospheric speech. The main lights were shut off and she was left in the centre of the stage with others, shining a torch onto her. This definitely worked to create the mood, and also symbolized her feelings of being alone at the time. The sound can be used during blackouts to keep the audience entertained, but it is mainly used in the actual piece. It can be used to startle the audience or to show that something is happening. Background music can also be used sometimes if the actors are miming or if the scenes setting permitted this. For instance, in Trojans there was a battle, but we did not have the resources to act that out so we had a blackout and used recorded gunfire and shouting etc. ...read more.

Jones. The things that the character does and the way that characters speak give an insight into the character also. Small things often give large insights into the character. For instance, giving an actor a slight stutter can show that the character is of a nervous disposition or a player always fiddling with something could demonstrate this also. As mentioned above the audience must believe that the character is capable of doing the things that he/she does. The characterisation also helps to give twists and turns in the plot. For instance, a person who tells the audience that he hates Mr. Moscow in a monologue would be the prime suspect for the audience when Mr. Moscow is found dead, though it may not have been that person who actually committed the crime. Characterisation, Lighting, Sound and Set Design all help to make a drama piece what it is but the piece would not work if the above didn't work together along with other elements also. 1 Rachel Randle 10G ...read more.