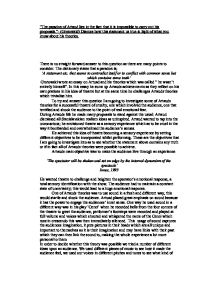 &quot;The paradox of Artaud lies in the fact that it is impossible to carry out his proposals.&quot;- (Grotowski) Discuss how this statement us true in light of what you know about his theories.

"The paradox of Artaud lies in the fact that it is impossible to carry out his proposals."- (Grotowski) Discuss how this statement us true in light of what you know about his theories. There is no straight forward answer to this question as there are many points to consider. The dictionary states that a paradox is; 'A statement etc. that seems to contradict itself or to conflict with common sense but which contains some truth' Grotowski wrote an essay on Artuad and his theories which was called " he wasn't entirely himself". In this essay he sums up Artauds achievements as they reflect on his own pratices in his idea of theatre but at the same time he challenges Artauds theories which trivialise him. To try and answer this question I am going to investigate some of Artauds theories for a successful theatre of cruelty, one which involved the audience, one that terrified and shook the audience to the point of real emotional fear. During Artauds life he made many proposals to stand against the usual. Artaud dismissed all Stanislavskian realism ideas as uninspired. Artaud wanted to tap into the unconscious; he envisioned theatre as a sensory experience which as to be cruel in the way it bombarded and overwhelmed the audience's senses. ...read more.

more emotional and personal for the audience involved, none of the audiences memories will be the same and therefore they may come out with mixed emotions some may have related the sound back to a happy time others to a time when they were sad. Another of Artaud's theories was to use language in a different way; this theory is linked to Artaud's theory on sound. Artaud had ideas for a 'new language' he mentioned this in many of his essays including The Theatre And It's Double but they were never clearly articulated. He wanted actors not to use the spoken language to communicate but a 'bodily language' that was based on signs and not words through gestures, postures and air-borne cries. This idea came from when he went to see the Balinese Theatre which he saw in the Colonial Exhibition in Paris in 1931. he said "I am well aware that a language of gestures and postures, dance and music is less able to define a character, to narrate a man's thought, to explain conscious states clearly and exactly, than spoken language". Here himself Artaud points out the problem with using gestures rather than spoken words, that a characters personality would not be completely known. ...read more.

Another of Artauds theories involved the positioning of the audience and the theatres 'stage' being around them so as to surround them. 'the auditorium will be enclosed within four walls, stripped of any ornament, with the audience seated below, in the middle, on swivelling chairs, allowing them to follow the show taking place around them.' (T&ID, 1985 p.75) Artaud wanted total sensory identification with the show he wanted the audience to feel like they were part of the show by including them in the show. He invaded the audience's personal space which forced the audience to take part with no show whether they wanted to or not, this was forcing them to share the actor's emotions and was making them live the experience, which was Artauds main idea. Artaud suggested that '... a kind of single, undivided local without partitions of any kind and this will become the very scene of the action' in other words there would be no traditional divide between the actors and the audience , this would enable and in fact force the audience to become part of the show themselves. In class we have being trying this theory a lot by placing the audience in the middle in different seating arrangements we were able to test how they felt safest and feel they felt the most exposed and involved in the actors movements. ...read more.