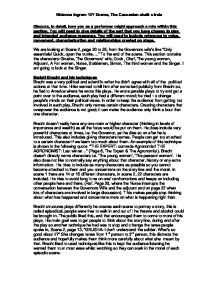 Discuss, in detail, how you as a performer might approach a role within this section.

Discuss, in detail, how you as a performer might approach a role within this section. You will need to give details of the part that you have chosen to play and intended audience response. You will need to include reference to voice, movement, characterisation and relationships created on stage. We are looking at Scene 2, page 20 to 25, from the Governors wife's line "Only essentials! Quick, open the trunks...." To the end of the scene. This section contains the characters: Grusha, The Governors' wife, Cook, Chef, The young woman, Adjutant, A Fat woman, Nurse, Stablemen, Simon, The third woman and the Singer. I am going to look at the Singer. Berlolt Brecht and his techniques Brecht was a very political and scientific writer he didn't agree with all of the political actions at that time. Hitler wanted to kill him after some bad publicity from Brecht so, he fled to America where he wrote this plays. He wrote parable plays to try and get a point over to the audience, each play had a different moral; he tried to change people's minds on their political views. In order to keep the audience from getting too involved in each play, Brecht only names certain characters. Creating characters that overpower the audience is not good; it can make the audience only think about that one character. Brecht doesn't really have any one main or higher character (thinking in levels of importance and wealth) as all the focus would be put on them. He does include very powerful characters at times, i.e. ...read more.

" Once upon a time A time of blood shed When the city was damned It had a Governor." The Singer can be portrayed in different ways, as one of the characters who, when she is speaking is on the same level as the other performers and they carry on performing whilst the singer is speaking. She could also be a member of the audience; they can then share a 'one on one' with the Singer. She then hopefully distracts them from the play to explain what has been happening. Brecht also uses the technique of dividing the stage by separating the Singer from everyone else. Either the other characters freezing when she is speaking or she is placed on a higher or lower level to show she is different can achieve this. The Singers speeches are varied, she can be described as giving stage directions at times where she directs what each character does. Yet she rationalises each scene. Sometimes the Singer only comments on the surrounding actions and functions as a voice over. There are no stage directions for the Singer, in this section or in 'the play within the play.' This could suggest that she is lower or higher than everyone else but, most importantly it shows her narrating responsibility. Perhaps the Singer is watching what is happening and never leaves the stage, but using one of Brecht's techniques, the Singer could be played by a variety of different people who are all wearing or holding a certain object to show they are the Singer. ...read more.

Here I have shown my thoughts visually. I didn't personally use this but when analysing my own performance and how I could possible improve the standard. This is what I thought of. There is also a well-thumbed embellished script placed on a music stand. The script tells us this character is a narrator and the music stand and musical notes embellished on to the book symbolise the Singer. When the singer is speaking that particular characters vocal tone should change. This should only be to suit the piece that they are reading and facial expressions are very important. The two last factors I used when directing and acting in this section was 1) gestus and 2) lighting. Gestus should be small but visible, i.e. when the line " The city full of flame and grief" (Page 24, Singer) is said the gesture could simply be to point in to the distance and bow their head, telling us how bad and horrible it is and where the grief is coming from. Simple but effective movements create a better atmosphere. " The soft breathing, the little fists" (Page 25,Singer.) When this line is spoken perhaps the current singer could simply look down at their fists and hold their hands to together. Look as though they are thinking back to their childhood. Lighting is the last and most important thing. A soft spot light should be on when the singer is speaking and gentle fade when they have stopped, No colour should be used when lighting the character and no defined line around the person, just a gentle diffused light surrounding them. Rhianna Ingram 10Y Drama, The Caucasian chalk circle ...read more.