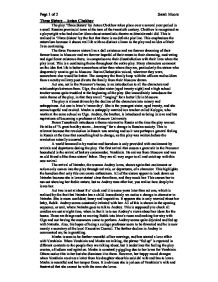 Three Sisters - Anton Chekhov The play 'Three Sisters' by Anton Chekhov takes place over a several year period in a small Russian provincial town at the turn of the twentieth century. Chekhov is recognised as a playwright who had similar ideas about naturalistic theatre as Stanislavaski did. This is realised in 'Three Sisters' by the fact that there is no definite plot line. This emphasises the naturalism because it shows real life with no distinct climax to the play and an idea of their lives continuing. The three Prozorov sisters live a dull existence and are forever dreaming of their former home in Moscow and are forever hopeful of their return to their charming, motivating and significant existence there, in comparison to their dissatisfaction with their lives when the play is set. This is a continuing theme throughout the entire play. Many characters comment on the idea that life is better somewhere other than where they are, particularly the sisters who desperately want to get to Moscow. But as Chebutykin voiced, wherever they were, somewhere else would be better. The company the family keep with the officers and soldiers from a nearby military post diverts the family from their Moscow dream. Act one, set in the Prozorov's house, is an introduction to all the characters and relationships between them. ...read more.

When Vershinin and Masha are talking, the phrase "fed up" is repeated in different contexts to the people they are talking about, but it underlines the feeling the play creates, of tedium and agitation. Masha is constantly giggling due to her loves for Vershinin. Others notice this in her but she dismisses it to them. However, her happy mood changes when Vershinin receives a letter from his daughter about his suicidal wife and has to leave. Masha is resentful and her temper flares. It is obvious she is jealous of Vershinin's wife and frustrated that she cannot be with the man she loves. When Tusenbach and Irina enter, it is realised that Tusenbach is attracted to Irina. Later on, we realise that Solyony is also attracted to Irina. However, Irina rejects them both, and this is perhaps because she has other suitors in mind and is looking for her one true love. Tusenbach also introduces another theme of the play of their reflection on life after them and how they will be forgotten with a gradual change (Russian revolution), but it will create a better life for others. Natasha has told the family that the mummers, who were to be the night's entertainment, are not to come because Bobik is ill. ...read more.

She has resigned herself to marrying the Baron Tusenbach and is just letting life go on and leaving her life in the hands of fate. However, the Baron is challenged to a duel with Solyony, who is jealous that he is going to marry Irina. Solyony defeats Tusenbach and Irina is left on her own again. This seems like it would be a climax within the play, but not much emphasis is placed on this duel and the impression that life goes on is left with the audience. Chebutykin is also moving on to serve his last year as doctor of the army. He gives advice to Andrey to move on and leave behind his troubles with Natasha and the house. This idea is left open as to whether he takes this idea on board, but the last image is of him with his baby, so perhaps he is so attached, he does not let go. I think this is one of the purposes to Chekhov's style that the characters lives continue after the play. As the regiments move on and as the birds fly south for the winter, this significant image shows the want of the characters to move on, and for a better life. The play seems like the lives within it are not finished with the play, but have a purpose beyond it. Page 1 of 2 Sarah Moore ...read more.