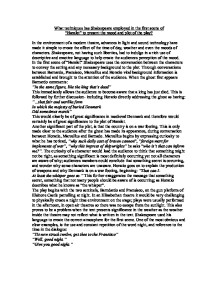 Whattechniques has Shakespeare employed in the first scene of

What techniques has Shakespeare employed in the first scene of "Hamlet" to present the mood and plot of the play? In the environment of a modern theatre, advances in light and sound technology have made it simple to create the effect of the time of day, weather and even the moods of characters. Shakespeare, not having such liberties, had to indulge in a rich use of descriptive and emotive language to help create the audiences perception of the mood. In the first scene of "Hamlet" Shakespeare uses the conversation between the characters to convey the setting and any necessary background to the plot. Through conversations between Barnardo, Fransisco, Marcellus and Horatio vital background information is established and brought to the attention of the audience. When the ghost first appears Barnardo comments: "In the same figure, like the king that's dead" This immediately allows the audience to become aware that a king has just died. This is followed by further discussion- including Horatio directly addressing the ghost as having: "...that fair and warlike form In which the majesty of buried Denmark Did sometimes march" This would clearly be of great significance in medieval Denmark and therefore would certainly be of great significance to the plot of Hamlet. Another significant part of the plot, is that the country is on a war footing. This is only made clear to the audience after the ghost has made its appearance, during conversation between Horatio, Marcellus and Barnado. ...read more.

The very fact that it is a cold dreary night time scene may reflect on the audience's perception of the mood. The dialogue that first begins with Barnardo and Fransisco reflects what may be said by a sentinel on guard, helping to create their status and character. Yet in this instance it also creates a sense of great tension, in that they both wrongly believe the other to be an intruder. Barnardo even admits "You come most carefully upon your hour" which reveals that he would have expected Fransisco to arrive then, so his appearance would not have been unexpected. This tension and unease would allow the audience to believe that something is not right. The short staccato lines in the opening dialogue also give a sense of unease and nervous haste: "Who's there?" An educated Shakespearian audience would be aware of the poetry of his plays and the regular rhythm of the iambic pentameter that structures all of the text. Therefore to being with a two word, fast line may be very unexpected and exciting and would immediately grip the audience. The shared lines also give a similar effect yet follow the iambic pentameter: "Give you good night. Oh farewell honest soldier." The shared lines are not as concentrated as the staccato lines and allow the audience to recognise the regular structure of a Shakespeare play yet still allow the fast pace of the nervous scene to flow consistently and to sustain the dramatic tension. ...read more.

This would stimulate the audiences imagination into thinking about a volcano and how the lava initially explodes from a single point, yet eventually it is seeming down the sides of the volcano spilling out, unfolding over the land. The end of the scene sees a real transformation. Dawn breaks, and seems to take away the fear and nervous tension that the night contained. This is shown in the description of the arrival of dawn: "The morn in russet mantle clad Walks o'er the dew of yon high eastward hill." The comparison of dawn to a traveller wearing a russet (red) mantle brings a certain warmth to the scene and seems to relax the atmosphere. For this line the iambic metre is broken: "But LOOK the MORN in RUSset MANtle CLAD WALKS o'er the DEW of YON high EASTward HILL." The stresses on the language here is very different to that of the previous language of the scene. This captures the feeling that a change has occurred with the arrival of dawn and that the scene is more relaxed. Shakespeare uses his first scene of "Hamlet" to introduce vital background knowledge of the play and allows the audience to appreciate some of the content of the play, making them a little more aware of what sort of play they are about to see. Not having the technically enhanced artificial lighting and sound that modern theatres and directors are privileged to have, Shakespeare indulged in a very rich use of descriptive and emotive language to create, for the audience, the mood of the play. ...read more.