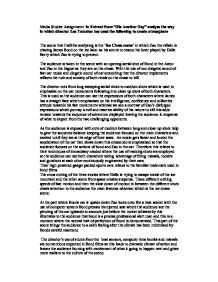 Analyse the 'ice chase scene' from &quot;Die Another Day&quot;, show the way in which director Lee Tamaton has used different techniques to create atmosphere.

Media Studies Assignment: In Extract from "Die Another Day" analyse the way in which director Lee Tamaton has used the following to create atmosphere The scene that I will be analysing is the 'Ice Chase scene' in which Zao the villain is chasing James Bond on the ice lake- as his aim is to rescue his lover played by Halle Berry which Zao is trying to prevent. The audience is taken in the scene with an opening aerial shot of Bond in the Aston and Zao in the Jaguar as they are on the chase. With the use of non-diegetic sound of fast car music and diegetic sound of car screeching that the director implements reflects the rush and anxiety of both rivals on the chase to kill. The director cuts from long sweeping aerial shots to medium shots which is used to emphasize on the car movements following into close up shots of both characters. This is used so the audience can see the expressions of both characters where James has a straight face which emphasises on his intelligence, confidence and collective attitude towards his fast movements whereas we see a contrast of ...read more.

These different editing speeds of fast motion and then the slow down of motion in between the different shots draws attention to the audience the main features of action which is the ice chase scene. At the part where Bonds car is upside down Zao locks onto fire a heat seeker with the use of computer system Bond presses his ejected seat where the audience see the pivoting of the car upwards in seconds just before the rocket whizzes by this illustrates to the audience that bond is a precise professional alert man and this is a moment where the natural trait of perfection of Bond is demonstrated. This part of the scene brings the audience to a calm feeling after the climax has been minimised by Bonds careful reactions. The director's use of stunts from the heat sensors, computer time bombs and missals are conventions expected in Bond films as this leads to dramatic climax of action and leaves the audience burning with excitement of what it going to happen next and gives more realism to the culture of the scene. ...read more.

The director portrays a long shot at the ending of the sequence, where the audience visualise Bond in the Aston speeding with Zao in the Jaguar following him. This is portrayed so that the audience capture the speed and density of driving on the blue colouring spread on the ice lake to give a glossy real effect where the shot also adds distance and a cold wiery atmosphere that Bond escapes from in which the scene ends. My conclusion of Tamaton's use of spectacular physical action in the 'Ice chase scene' of explosions, chases and battles adds to the narrative of the story and the deployment of state-of -art special effects to emphasis in performance on athletic feats and stunts. This has been a conventional trend from the 1980's and a dominant trend in the 1990. Therefore these natural conventions in the scene that Tamaton has used create the expected atmosphere of unprediction and tension that builds up playing on these important elements. This is why the 'Ice lake scene' has given a cold exciting thrilling atmosphere and exhilaration to the audience's expectations from the beginning and the ending of the scene. ...read more.