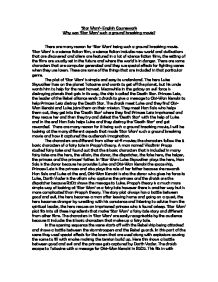 Why was 'Star Wars' such a ground breaking movie?

'Star Wars'- English Coursework Why was 'Star Wars' such a ground breaking movie? There are many reason for 'Star Wars' being such a ground breaking movie. 'Star Wars' is a science fiction film, a science fiction includes new world and civilisations that are discovered and aliens are featured in a lot of science fiction films, the setting of the films are usually set in the future and where the world is in danger. There are some characters that are computer generated and they sue special effects for fighting scenes when they use lasers. These are some of the things that are included in that particular genre. The plot of 'Star Wars' is simple and easy to understand. The hero Luke Skywalker lives on the planet Tatooine and wants to get off the planet, but his uncle wants him to help for the next harvest. Meanwhile in the galaxy an evil force is destroying planets that gets in its way, the ship is called the Death Star. Princess Leia, the leader of the Rebel alliance sends 2 droids to give a message to Obi-Wan Kenobi to help Princess Leia destroy the Death Star. The droids meet Luke and they find Obi-Wan Kenobi and Luke joins them on their mission. They meet Han Solo who helps them out, they get into the 'Death Star' where they find Princess Leia imprisoned and they rescue her and then they try and defeat the 'Death Star' with the help of Luke and in the end Han Solo helps Luke and they destroy the 'Death Star' and get rewarded. ...read more.

These are some of the things you might see in a bar. The different types of aliens are based on animals linking animals and humans to the aliens making the aliens like something we know and we will accept them in our society. Luke Skywalker, the hero meets Han Solo, who only thinks about himself and money. A character that comes into this scene is Jabba the hut and Han Solo owes him money. The special effects used in this scene are the wheels on the vehicle; they used Vaseline on the film to smudge out the wheels making it look like it was hovering. To keep the audience interested and focused the scene has music in the background. In this scene the music is diagetic where aliens play instruments in the bar. There are camera angles in this scene that are used for a certain reasons. There were close ups of the aliens to show their features and facial expressions so the audience can get a look of what they look like close up and can tell by their facial expressions whether they are aggressive, angry, happy etc. another camera angle that is used is the over shoulder angle, it is used when Jawas is looking at Luke's sand speeder which gives the affect that the audience is looking at the speeder as well ain an over shoulder view. All these things included in the scene gives the audience different messages. ...read more.

I think that the sci-fi has fascinated many people over the years because the story plots of sci-fi are interesting and it's unrealistic and the film includes newly discovered world and civilisation along with alien creatures. I think that 'Star Wars' still is as popular today 25 years after the first film had been released because the film has a good plot and fits into the category of fairy tales as it has characters that are included in a fairy tale, so this makes it different from other sci-fi movies. It includes a scene which is like a western scene in a bar. George Lucas has put many different ideas into the sci-fi film. He got his ideas from Japanese films made by Kurasawa. The religion was based on Samurais. I think that the reasons for 'Star Wars' being a ground breaking movie because it had special effects that made it more realistic and affective and builds up the audience's excitement, the aliens were something new to the audience and they had human qualities that could be compared with themselves and the religion that was based on an eastern religion which helped the audience to understand eastern religion through the films. A sci-fi movie normally only have aspects that make it a sci-fi but 'Star Wars' made it also a fairy tale. These reasons make the film more interesting and appealing to the audience as they can learn and compare themselves with some of the aspects that are included in the film. ...read more.