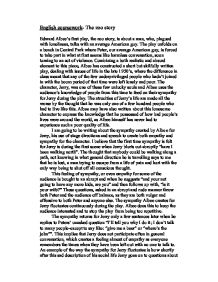 Edward Albee’s first play, the zoo story, is about a man, who, plagued with loneliness, talks with an average American guy. The play unfolds on a bench in Central Park where Peter, our average American guy, is forced to take part in what at first seems like harmless conversation, soon turning to an act of violence. Combining a both realistic and absurd element to this piece, Albee has constructed a short but skilfully written play, dealing with issues of life in the late 1950’s, where the difference in class meant that any of the few underprivileged people who hadn’t joined in with the boom period of that time were left lonely and poor. The character, Jerry, was one of these few unlucky souls and Albee uses the audience’s knowledge of people from this time to feed on their sympathy for Jerry during the play. The atrocities of Jerry’s life are made all the worse by the thought that he was only one of a few hundred people who had to live like this. Albee may have also written about this lonesome character to express the knowledge that he possessed of how bad people’s lives were around the world, as Albee himself has never had to experience such a poor quality of life.

I am going to be writing about the sympathy created by Albee for Jerry, his use of stage directions and speech to create both empathy and sympathy for the character. I believe that the first time sympathy is felt for Jerry is during the first scene when Jerry blurts out abruptly “have I been walking north”. The thought that anybody could be walking along a path, not knowing in what general direction he is travelling says to me that he is lost, a man trying to escape from a life of pain and hurt with the only way being to shut off all conscious thought.

This feeling of sympathy, or even empathy for some of the audience is bought to an abrupt end when he suggests “and your not going to have any more kids, are you” and then follows up with, “is it your wife?” These questions, asked in an abrupt and rude manner throw both Peter and the audience off balance, as they are both vulgar and offensive to both Peter and anyone else. The sympathy Albee creates for Jerry fluctuates continuously during the play. Albee does this to keep the audience interested and to stop the play from being too repetitive.

The sympathy returns for Jerry only a few sentences later when he replies to Peters’ unasked question “I’ll tell you why I do it; I don’t talk to many people-except to say like: ″give me a beer″ or ″where’s the john″”. This implies that Jerry does not participate often in general conversation, which creates a feeling almost of empathy as everyone remembers the times when they have been left out with no one to talk to.  An example of the way the sympathy for Jerry fluctuates is how shortly after this sad description of his social life Jerry goes on to questions about whether Peter’s birds “carry disease” and that if they did he “could set them loose in the house and the cats could eat them and die, maybe”. This brings up questions about Jerry’s sanity as well as losing any sympathy he has gained from the previous sentences. The level of sympathy quickly rises again as Jerry describes his house, going into detail about everything he owned, he even manages to describe everything he possesses in a few short sentences here. He tells us about the one plate, one glass and the one knife and fork set he owns which shows the lack of human contact Jerry is blessed with. He comments on the people he shares his home with, describing the drag queen who lives next door, spending hours in the toilet and the lady downstairs who cries all day, furthering the feelings felt towards Jerry by the audience. Albee talks extensively about Jerry’s life in this part of the play, describing Jerry’s family and childhood, the lack of a mother in his life and the need for a father for the better part of his childhood. His family along with his possessions and neighbours create an even greater feeling of sympathy towards Jerry in the hearts of the audience.

The following pages of the play carry on with the pattern of fluctuations in the level of sympathy, dropping when he tries to kill the landlady’s dog and rising again in the final stages of the play when Jerry kills himself on his own knife.

In my opinion the moment of maximum concern felt for Jerry is shortly after he talks about his house when Jerry describes the landlady of his “four-storey brown-stone rooming-house”. He confides in Peter the many occurrences when “she presses her disgusting body up against me to keep me” and whispers things in his ear words concerning some “foul parody of sexual desire”. The thought of anybody doing this is a thought almost unbearable to anybody except the sick minded but the fact that Jerry puts up with it every day is even more extreme. Albee uses this fact to its full extent in creating sympathy for Jerry in these scenes of the play.